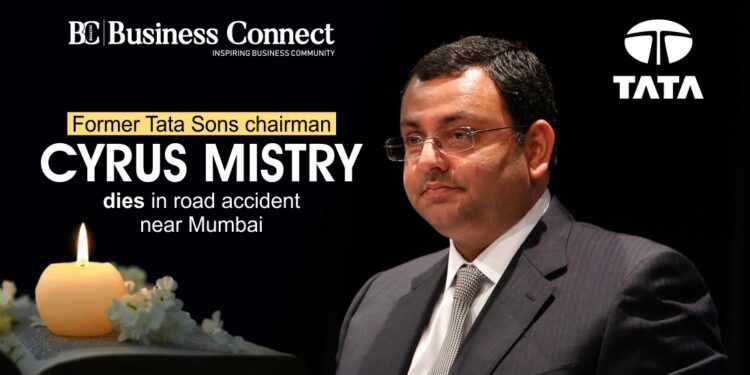 On Sunday afternoon, Cyrus Mistry, the former CEO of Tata Sons, was killed in a crash on National Highway 48 in the Palghar district of Maharashtra. Mistry (54) along with three other people was travelling from Gujarat to Mumbai. Around 3.15 pm, a Mercedes swerved out of control, collided with a road divider, and slammed into a wall on the Charoti bridge over the Surya river, killing two people, including Jehangir Pandole, Director at KPMG Global Strategy Group.

Leading gynaecologist Dr. Anahita Pandole of Mumbai and her husband Darius Pandole, who was riding in the front seat, were both seriously hurt in the collision. They were transported to a private hospital in Vapi, Gujarat, where they are currently being treated in ICU. Jehangir Pandole’s sister-in-law, Dr. Anahita Pandole, predeceased him. Jehangir Pandole was seated next to Mistry in the Mercedes’ back seat. Internal injuries caused the deaths of both men.

The two deceased passengers in the back were not wearing seat belts, which is why their airbags did not deploy, according to a police official from Palghar’s Kasa. They became wedged between the front and back seats when the car crashed. The Mistrys are close friends with the Pandoles. Managing Director and CEO of the PE & Equity AIFs at JM Financial is Darius Pandole. When Mistry was fired from his position as head of the Tata Group, he resigned from the board of Tata Global Beverages Limited (TGBL), where he had previously served.

Dr. Anahita Pandole is another activist who brought a Public Interest Litigation (PIL) against illegal hoardings in Mumbai to the High Court. Mistry had accompanied the three Pandoles as they travelled to Udvada in Gujarat for a religious ceremony. On Sunday, they were going back to Mumbai.

The severely injured Pandole couple was transported to Rainbow Hospital in Vapi by police officer Yogesh Avtar. “Anahita Pandole and Darius Pandole were brought to our hospital in a very bad condition,” hospital doctor Tejas Shah said. Their blood pressure had decreased, and so had their oxygen saturation levels. They are traumatised and have numerous fractures. Their BP and O2 saturation, however, have improved. As per the information a medical team from Mumbai is visiting them.

According to sources in Mumbai, Darius Pandole broke both of his jaws, which caused an obstruction in his airway. His airway is now clear, and he is stable after a maxillofacial surgeon removed his jaw. Besides having a collapsed lung, Dr. Anahita Pandole also has a broken hip. On Monday morning, sources said, she will be flown to Mumbai. Mistry and Jehangir Pandole’s bodies have been kept at a government hospital, and they will be transported to Mumbai for a postmortem at the government-run JJ hospital.

At Charoti, about 120 kilometres from Mumbai, there is a new and old bridge over the Surya river, and the new bridge had been taken by Dr. Anahita Pandole. They were returning from Gujarat. At the wheel, Anahita Pandole was attempting to pass a car on the left. The road narrows from three lanes to two lanes at the bridge over the Surya river. According to Balasaheb Patil, police superintendent of the Palghar district, “She rammed into the edge of the bridge.”

“We believe there was a mistake in judgement. The car was travelling too fast. No other vehicles were involved in the collision, according to Patil. When questioned about the Mercedes’ potential speed and whether a mechanical issue might have contributed to the collision, Patil responded, “A team from the RTO Department is here. They’ll check the car’s speed and see if there were any mechanical problems.

The National Highways Authority of India (NHAI), which is in charge of NH48, said Suraj Singh: “The highway has six lanes. There are three lanes on the bridge going to Gujarat, but there are two bridges going to Mumbai, each with two lanes. Due to the vehicle’s high speed, drivers must make a slight turn, which Anahita Pandole might not have done.

The bridge, according to Singh, had not been harmed, but the crash barrier had some scratches. Devendra Fadnavis, the deputy chief minister of Maharashtra, has mandated a thorough investigation into the accident. The police claimed that neither a CCTV camera nor a camera in the car were present at the scene. The location is not prone to accidents, and the road is in excellent shape and free of potholes. The Kasa Police stated that an FIR would be filed against the driver after they received the forensic report. A private finance company, according to them, is the car’s owner.

Two witnesses to the incident have been named by the police: a passerby driver and a worker at an auto repair shop. According to what is known, they told the police that they saw the car lose control and that no other vehicles were involved in the collision.

How to become a Highly Successful Leader