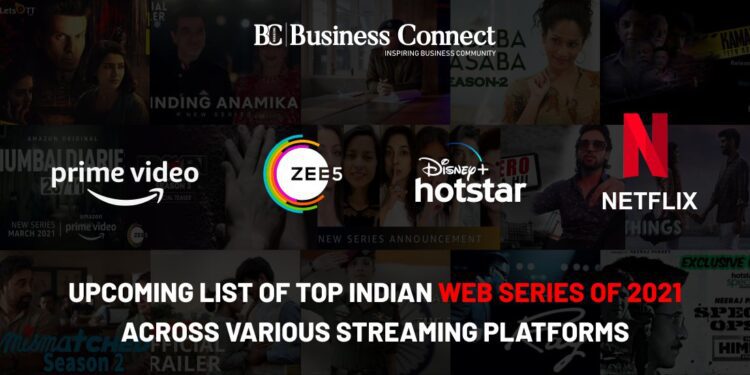 As digital media gets gradually energetic, Indian web series has become a foremost source of entertainment. The OTT platforms such as Amazon Prime, Disney+Hotstar, Netflix, Zee5, etc. have some great web series that is worth the watch and is keeping us hooked to the screens.

People are more into watching web series rather than TV serials. It’s time to mark your calendars for the month as the OTT platforms are promising a lot of excitement in store.

Here is a rundown of few Upcoming Indian Web Series for 2021 that you might be looking for:

Seems like finally the wait for the must watch web series Asur Season 2 is going to be over as Voot has hinted to us the another season of its acclaimed psychological thriller to be hitting the screens super soon. Asur’s second season is expected to be another enthralling story that will keep fans engaged and on the edge of their seats.

One of the must-watch web series, Delhi Crimes is the most well-known drama television series on Netflix that was based on the true events of Delhi gang rape 2021 that occurred in South Delhi. Now, the Emmy award-winning series has been confirmed that the core cast of the show is returning for Season 2 and might be focusing on a new crime.

The Disney + Hotstar new web series is a crime thriller, and Ajay Devgan is all set to be playing a cop in his web series debut. “Rudra – The Edge of Darkness” is a crime drama series that is a remake of the well-known British series “Luther”, starring Idris Elba.

The upcoming web series 2021 will be coming with its next season. Ever since the conclusion of the first season of this top-rated Indian Web Series, its viewers have been left eagerly waiting for the updates on the second season and now it’s out to be soon streaming on Netflix.

This exciting thriller-drama upcoming web series is going to be led by the leading ladies playing pivotal characters. Authentic stories of women have been brought forward to audiences in India & Abroad. Hush Hush drives the movement of women that comes forward telling their stories.

The thriller-drama upcoming Hindi web series marks the comeback of Madhuri Dixit into the OTT sphere. The plot revolves around a global superstar vanishing without a trace.

A supernatural crime thriller to hit your screens with a mysterious plot set in Himachal. After the disappearance of a foreign teenager, the case digs up an elapsed myth of the Himalayas’ serial killing set-up in the forest.

A not-so-normal love story is on its way to hit the screens with Shweta Tripathi and Tahir Raj Bhasin coming together as leads. The upcoming Indian web series on Netflix is a psychological thriller that has some dark comical desi thrillers about Paisa, Taqat and Pyaar.

Must Read:- A Step to Succeed During COVID-19 with Low Investment Business Idea

The second season of Code M is going to hit the screens soon. Jennifer Winget marked her internet debut with Code M as Major Monica Mehra and now she is coming back and her priority, “country above family” has not changed.

This cute love story of Netflix is coming back to give you some relationship goals again by the return of Kavya and Dhruv to celebrate their 6 years of togetherness. Once again let’s get indulged in the growing pains and adventures of this couple.

The mother-daughter duo is coming back with another season to get you involved in their fictionalized drama that is based on their lives. The upcoming season of this Indian web series will be showing both women once again trying to balance their career, friendship and love.

This young adult drama is arriving back on the platform with the story of Dimple and Rishi. Both will be seen directing their rough terrains of ragged friendships. The comeback of Mismatched, will be shedding some more light on how the story of both shapes up

In order to trace the beginnings of the protagonist, Himmat Singh, Special Ops is coming back with a developing prequel #TheHimmatStory.

This upcoming Indian web series is all set under the framework of the infamous 26/11 attacks of 2008. This Indian web series will pay tribute to the frontline heroes who have worked tirelessly to save people’s lives.

Following the success of the first season of ‘The Test Case,’ which starred Nimrat Kaur as Captain Shikha Sharma, Harleen Sethi is set to reprise her role as a strong and fierce character in the second season. The storyline of season 2 revolves around a female army officer who is in a relentless search for a mysterious man in her bid to find redemption.

The listed above series is one of those that one definitely must watch.

Question 5. What are the must-watch Web Series?
Answer. We have listed out a few must-watch web series for you:

Web Series and Movies in March 2021

Web Series and Movies in April 2021

Upcoming  Movies and Web Series in May 2021