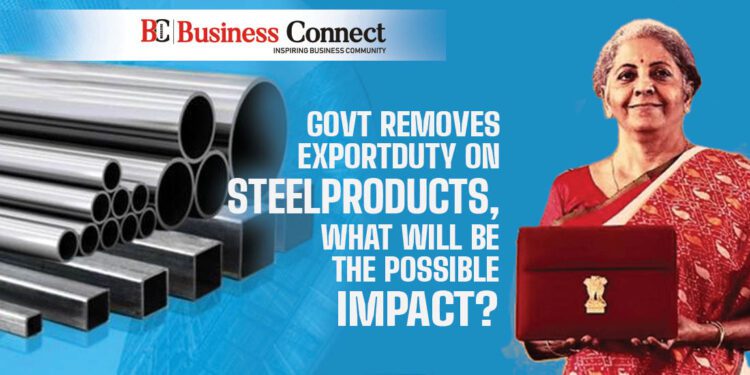 The government’s decision to abolish the export tax on steel products will aid in enhancing the financial and operational performance of steel players, according to a senior executive of Jindal Steel and Power Limited (JSPL),

According to Bimlendra Jha, managing director of JSPL, steel businesses experienced difficulty in the July-September quarter of the current fiscal year as a result of a number of reasons, including high input costs. When asked about the effects of the government’s decision, Jha responded that “it was a much-anticipated step” and that it will enhance the financial and operational performance of steel producers.

The leading domestic steel producers, including JSPL, Tata Steel, and JSW Steel, have either announced losses or registered a substantial decline in their net earnings for the July-September quarter, citing unfavourable market circumstances. Six months after the tax was implemented on May 21, the government reduced the export charge on steel goods and iron ore to zero with effect from November 19, 2022.

“I am confident that the government would abolish the duty when coking coal prices go too high,” he continued. “India significantly depends on imported coking coal for steel manufacturing.”

The two main raw materials used in the production of steel are coking coal and iron ore. India is not dependent on imports for coking coal, whereas iron ore is readily available domestically. The country imports coking coal, primarily from Australia, to cover 85% of its needs.

The Likely Impact on the Steel Industry

According to industry experts, the government’s plan to eliminate export taxes on ferrous and steel products is unlikely to significantly benefit the nation’s listed steelmakers because the decline in worldwide demand for steel has reduced export chances. Industry experts expressed fear that any significant increase in steel prices might cause the government to re-evaluate export taxes

However, experts noted that the tariff rollback would result in an emotional boost and that price expectations for steel companies like JSW Steel, Jindal Steel, and Power have been modestly raised upward by about 10% to 15%. Low system inventory may also offer short-term assistance. After the relaxation of export duties, price forecasts for Tata Steel and SAIL shares have not undergone any significant changes.

When steel prices in India and throughout the world hit a record high in May of this year, providing lucrative export opportunities, the levies were put in place. The scenario has, however, significantly changed since then. The demand forecasts for 2022 and 2023 by the World Steel Association (WSA) have been significantly reduced for all regions, including India. The Middle East and Africa are the only outliers.

The updated predictions for 2022 steel demand growth have been revised downward to -2.2%. Tata Steel’s European operations provide it significant exposure to Europe and the UK, where the demand decline is anticipated to be the steepest.

For comparison, European steel prices were about $1,000 (almost $77,000) per tonne in May, while Indian steel prices (hot rolled coil) were over 70,000 per tonne. Premiums on international markets provided export prospects and increased production levels for domestic steel makers.

In comparison, whereas European steel prices have fallen more than 40% to $600, or around 49,000 per tonne, Indian prices are currently at 55,000 per tonne, down 20–22%. In addition, prices in China are down 30% over the same period, according to industry monitors. Therefore, exporting steel might not be as advantageous for domestic producers.