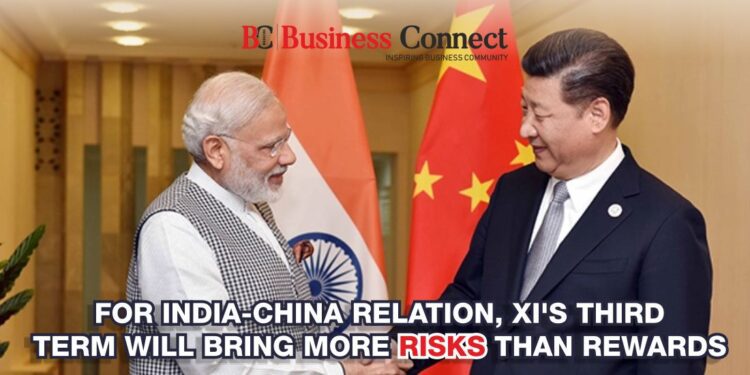 India would be more at risk than benefit from an almost certain third term for Xi Jinping as China’s president since bilateral relations across multiple fields, from trade to foreign affairs, would continue to be hampered by security concerns. At the completion of the week-long congress, which started on Sunday morning, Xi, 69, is expected to win the unusual third term and solidify his status as China’s most powerful leader since Mao Zedong.

According to experts, it’s doubtful that Xi’s third term will differ significantly from his second. Without more alluring counteroffers from India, China under him is likely to stay stubborn and refuse to open up its markets to Indian goods and services, further skewing the already large trade deficit in China’s favour.

New Delhi‘s goods trade deficit with Beijing increased to a record $73.3 billion in FY22 from $38.7 billion in FY13 during Xi’s term as Chinese President (he took office in 2013). In reality, China was responsible for nearly 38% of India’s overall trade imbalance in the previous fiscal year. The imbalance was only $0.7 billion in 2000–01, and with China’s economic strength, it has only gotten worse.

Tariff reductions for Indian exporters, particularly in industries that are important to them like agriculture, textiles and apparel, medicines, and leather, will remain a pipe dream in the absence of a free trade deal between the two nations. The notorious non-tariff barriers, frequently built by China to conceal its ferocious trade protectionism toward competitors, may continue to expand. This indicates that it will be difficult for even globally competitive Indian IT and ITeS companies to gain a larger share of the Chinese market.

As China’s economic clout increases, it will continue to stretch its muscles, endangering the security interests of India and countries in the Indo-Pacific region. This could result in new alliances of like-minded states to fight Chinese threats, similar to QUAD, the Indo-Pacific Economic Framework, or the supply-chain initiative, which is mostly led by the US or its allies.

“In all likelihood, in his third term, Xi would adopt a hard-line strategy with India about the line of actual control, as well as issues like the Galwan and Ladakh,” said C. Uday Bhaskar, director at the Society for Policy Studies. New Delhi would maintain a cautious and constrained foreign direct investment policy for China, on the other hand. Such a policy was first used in April 2020, following the epidemic, when India suspended the automatic approval procedure and required government permission for FDI requests from nations with which it shared land borders. Even if it loosens the rules in the future, it will still be apprehensive of increased Chinese influence in vital sectors of Indian companies.

As a result, over the years, FDI from China scarcely poured in. Only $2.46 billion, or 0.4% of all FDI inflows into India over this time period, came from China between April 2000 and June 2022. Previous commitments by China, notably those made under Xi, to increase investments in India in response to the widening trade gap haven’t come to pass. In fact, Chinese investments in Indian companies have increased recently, but they still lag behind the enormous potential. Chinese investments in Indian businesses reached $4 billion between 2015 and 2020, according to foreign policy think tank Gateway House, and 18 Indian unicorns received Chinese funding. Byju’s, Paytm, Zomato, Big Basket, Ola, and Swiggy were among them.

“China’s expanding economic might isn’t much of a worry for many countries,” said Jayant Dasgupta, a former Indian ambassador to the World Trade Organization. Due to its economic dominance, China under Xi wants to stretch its muscles, and as a result, other nations should submit to it. This has extremely risky ramifications.

China is the country that India turns to for the purchase of capital goods, raw materials, and intermediate goods. Therefore, New Delhi will find managing the relationship challenging. Although there is a chance that trade between the two countries will grow (along with economic growth) and India’s reliance on China won’t soon diminish, several nations are working to find alternate supply sources. The supply-chain leverage that China currently has will be lessened if and when this occurs, according to DasGupta.