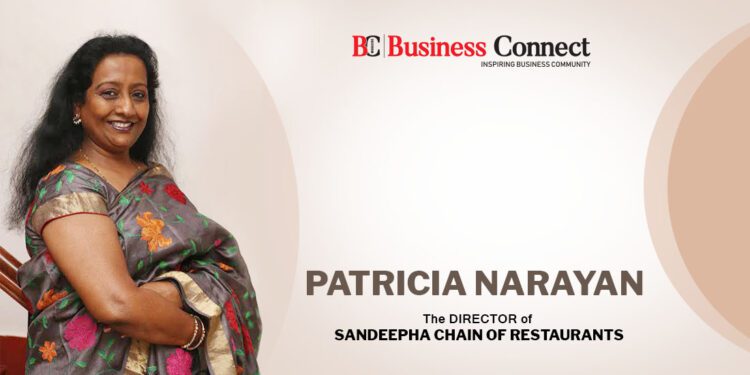 Patricia Narayan – The director of Sandeepha Chain of Restaurants.

Back in the time, women were confined to their kitchen by societies. Today the world is modernizing and no doubt societies’ mindset has also changed. Nowadays, women are moving ahead by taking new changeling work. if you see the entrepreneurial sector, they are also surprising across the world. Today I have brought a woman entrepreneur story who faced a major issue in the past and now she is the director of Sandeepha Chain restaurants. I’m sure her story will inspire men and women both who wish to full fill their dreams.

Patricia Narayan was the firstborn baby in her family and she belonged to a very conservative family. She really has a great life with her siblings. Her bad time begins when she was nineteen, earlier younger age she fell love with the man and got married. but her marriage went wrong. She said in TEDx, “my marriage was a disaster I had committed the mistake.” Since she got married without asking permission from the family, her parents and in-law’s family didn’t want to accept her. She mentioned that “I had brought myself and had nobody else to blame.” In such kind of situation, she had to take call do or die. She was a pregnant woman which made her change the priority she made a decision to live life for the child. Her journey was about to tough because she had no financial source.

A 19 years woman had no prior work experience in any sector. She realized that nobody is going to give her a job. So, she pursued the passion of cooking and started a small business from home. initially, she was selling jam and squash and pickle. Fortunately, her first business went well. However, she was not able to produce enough product because she didn’t have any commercial kitchen. Now she had a big concern about the next steps so she met with her father’s friends who gave it to her kiosk. She decided to start a business alongside the marina beach in Chennai. But she did not know that she should have permission from the government to set up a kiosk at the beach. She went to the PWD department with her 1 and half year child. The PWD department secretary won’t allow her to meet the seniors because Patricia didn’t have any recommendations latter. She said, “I started going every day just keeping mind that one-day any senior will ask who is this lady, it did happen.” One day she got permission to meet senior. However, PWD’s senior took a year to get the work done. After all, Patricia Narayan started the business with a kiosk at the beach. In the kiosk, she made an agreement of many foods such as Samosa, cutlet, French fries. But the first day she just sold one cup of coffee at price 50 paise. She came home with a heartbroken and had no courage to go kiosk the next day. At the time her mom motivated her and brought hope in mind. The next day she got up and went to the kiosk to sell the food. luckily the day didn’t come again in her life.

She said “people always asked me what is your qualification I proudly say that I have done MBA from Kiosk at the marina. I have learned all the business skills at the place.” She had an evening job at the marina beach. So, she started hunting the opportunity of another catering contract. She was taking contracted like bank catering, government catering and many more. She got one big breakthrough, when she got a catering contract from the national institute of port management, she was serving around 2000 people per day. After the time she never looked back. in her life, everything was going good but suddenly a bad thing happened, her daughter and son in law met with an accident and she lost both of them. At the time she felt everything is the end. Patricia Narayan pulled out herself and started working with her son. Later Patricia Narayan and her son stared the restaurant and named the restaurant Sandeepha that was the name of her daughter. In 2010, she got a FICCI Woman entrepreneur award.

How CBNITS is using Cutting-Edge Technologies to Revolutionize Future Business?