by Anurag Tiwari
in Blog, News 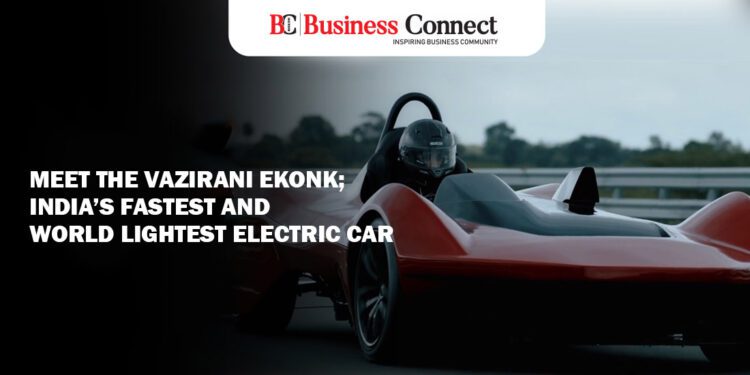 Vazirani Automotive, an Indian EV company, has unveiled the Ekonk, the country’s fastest single-seater hypercar, which also claims to be one of the world’s fastest accelerating automobiles. With a total weight of 738 kg, the spaceship-like all-electric automobile is also the lightest electric hypercar ever created. The Ekonk electric hypercar is powered by the EV startup’s new unique battery technology, which substitutes the old complicated liquid cooling method.


‘For us, Ekonksignifies our real beginning, where for the first-time design and innovation come together. it’s our first vehicle that’s ‘alive.’ the Company CEO, Chunky Vazirani, said.

The Ekonk electric hypercar has a power output of 722 horsepower and a power-to-weight ratio of roughly one to one. Ekonk employs a novel battery solution that eliminates the need for a more sophisticated liquid cooling technology.

It employs a technology known as DiCo, which allows the batteries to cool directly with air rather than liquid cooling. This technique, according to Vazirani, makes its electric vehicle lighter, quicker, safer, and more cost-efficient while also increasing its range. The body of the hypercar is entirely comprised of carbon fibre, which helps to minimize its weight. The vehicle was created to be one of the most aerodynamically fluid automobiles on the market, having one of the lowest drag coefficients in its class. This is primarily why the vehicle’s back wheels have been covered.

The new Vazirani Ekonk was put to the test at the Naxtrax high-speed facility in Indore, Madhya Pradesh, which was just opened. The business says it can sprint from 0 to 100 kilometers per hour in 2.54 seconds, with a peak speed of 309 kilometers per hour at the Natrax high-speed test circuit. This spaceship-like vehicle is said to be not just India’s fastest car, but also one of the world’s fastest accelerating vehicles. It also puts the company’s DiCo battery solution to the test, which substitutes the company’s century-old sophisticated liquid cooling technology.

Vazirani announced on its YouTube channel that “our battery structure and material innovation allow batteries to breathe straight to the air effortlessly.” The electric vehicle firm claims it investigated how people and animals manage their body temperatures to develop a first-of-its-kind solution. The Vazirani Ekonk’s availability and exclusivity have yet to be confirmed, but we expect it will be extremely difficult to buy.

Fastest electric cars in the world