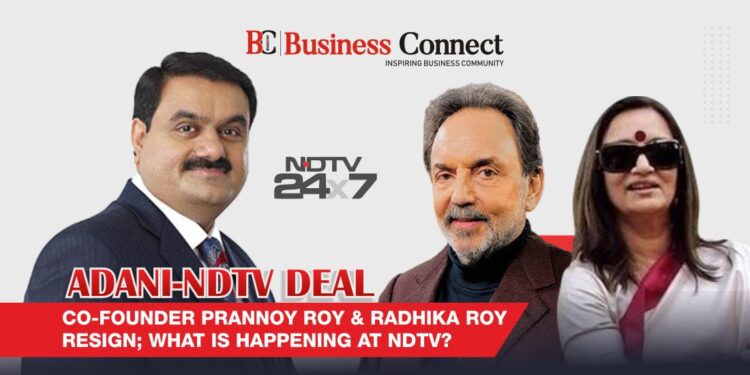 New Delhi Television (NDTV)founders Prannoy Roy and Radhika Roy have resigned as directors of promoter group vehicle RRPRH with immediate effect, the company said in a regulatory filing late on Tuesday (November 29).RRPR Holding Private Limited (RRPRH)holds a 29.18 percent stake in NDTV, which is being acquired by the Adani Group, owned by businessman Gautam Adani.

The statement said, “RRPRH has approved Senthil Sinniah Chengalvarayan, Sanjay Pugalia, and Sudipta Bhattacharya as new directors on Board with immediate effect.”

According to the report the Adani Group has offered Prannoy Roy to continue as the chairman of the NDTV board once the takeover is completed.

Let us tell you that earlier in August, Vishvapradhan Commercial Private Limited (VCPL) had bought a 99.5 percent stake of RRPR, the promoter company of NDTV. VCPL is a subsidiary of AMG Media Networks Limited in which 100% stake is held by Adani Enterprises Limited.

According to the promoter company of NDTV, it has transferred 99.5 percent of its equity capital to Adani Group-owned VCPL. With the transfer of these shares, Adani Group will get 29.18 percent stake in NDTV. Subsequently, the Adani group decided to make an open offer to acquire another 26 per cent state stake in NDTV, which would take the group’s total holding to 55.18 percent (29.18 + 26 = 55.18), which is enough to take over the ownership rights of NDTV. Earlier in October, VCPLhad made an open offer to the public shareholders of New Delhi Television Ltd.

The acquisition was announced in August

Let us tell you that Adani Group had announced the acquisition of Vishwapradhan Commercial Private Limited in August. It is important to note that in the years 2009 and 2010, Vishwapradhan Commercial Pvt Ltd had given INR 403.85 crore as a loan to RRPR Holding Pvt Ltd, the business promoter of NDTV.In return, a provision was made to take 29.18 percent stake in NDTV. Now the Adani Group company has made an open offer to buy an additional 26 percent stake.