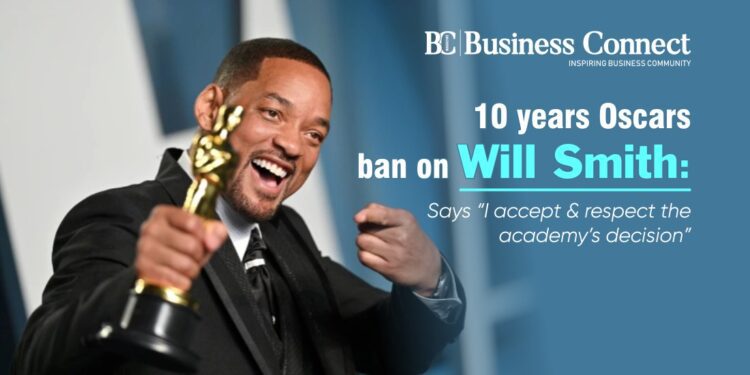 The film Academy has imposed a 10-year ban on actor Will Smith after he disrupted the 94th Academy Awards by slapping presenter Chris Rock on stage. For the next ten years, Smith will be barred from attending any Academy-related events, both virtual and in person. It does not, however, ineligible him from receiving Oscar nominations. The decision was taken after a meeting of the Academy’s Board of Governors to discuss the incident.

“I Accept Academy’s Decision,” Will Smith

“The Board has decided, for 10 years from April 8, 2022, Mr. Smith shall not be permitted to attend any Academy events or programs, in person or virtually, including but not limited to the Academy Awards,” wrote president David Rubin and CEO Dawn Hudson in a letter,” news agency AFP reported.

Will Smith is also barred from attending any Academy of Motion Picture Arts and Sciences events for the next ten years. According to AFP (news agency company), the board’s decision did not revoke Smith’s best actor award for King Richard last month, nor put a hold on future Oscar nominations.

It all started when Chris Rock took the stage to present the award for Best Documentary Feature and made a joke about Will Smith’s wife and actress Jada Pinkett Smith being in “G.I. Jane” because of her shaved head, which enraged The Pursuit Of Happiness actor, who smacked Chris Rock and yelled, “Keep my wife’s name out of your f*****g mouth!” Will Smith later apologised to the Academy and his fellow nominees when accepting the Best Actor award. The Academy of Motion Picture Arts and Sciences began a “formal review” of the situation a few days ago and also apologized to Chris Rock for the incident.