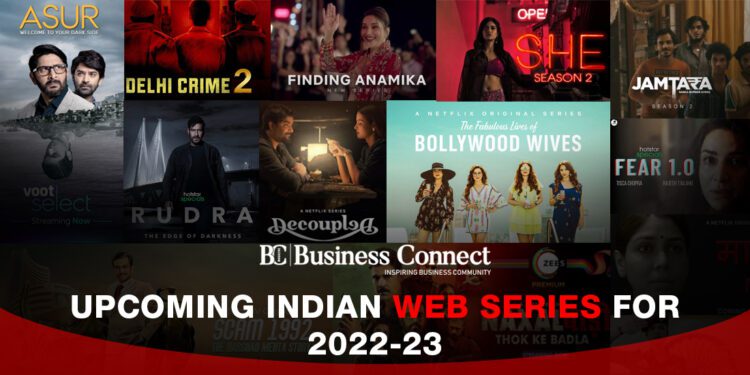 As digital media gets gradually energetic, Indian web series has become a foremost source of entertainment. The OTT platforms such as Amazon Prime, Disney+Hotstar, Netflix, Zee5, etc. have some great web series that is worth the watch and is keeping us hooked to the screens.

People are more into watching web series rather than TV serials. It’s time to mark your calendars for the month as the OTT platforms are promising a lot of excitement in store.

Here is a rundown of few Upcoming Indian Web Series for 2022-23 that you might be looking for:

Seems like finally the wait for the must watch web series Asur Season 2 is going to be over as Voot has hinted to us the another season of its acclaimed psychological thriller to be hitting the screens super soon. Asur’s second season is expected to be another enthralling story that will keep fans engaged and on the edge of their seats.

One of the must-watch web series, Delhi Crimes is the most well-known drama television series on Netflix that was based on the true events of Delhi gang rape 2021 that occurred in South Delhi. Now, the Emmy award-winning series has been confirmed that the core cast of the show is returning for Season 2 and might be focusing on a new crime.

The Disney + Hotstar new web series is a crime thriller, and Ajay Devgan is all set to be playing a cop in his web series debut. “Rudra – The Edge of Darkness” is a crime drama series that is a remake of the well-known British series “Luther”, starring Idris Elba.

Decoupled is a new Indian web series directed by Hardik Mehta and written by Manu Joseph. R Madhavan and Surveen Chawla will play the key characters in the series. Bombay Fables and Andolan Films are producing it. It’s a romantic comedy about a broken couple who are attempting to put their broken relationship back together.

The thriller-drama upcoming Hindi web series marks the comeback of Madhuri Dixit into the OTT sphere. The plot revolves around a global superstar vanishing without a trace.

Fabulous Lives of Bollywood Wives Season 2 is a reality show that focuses on the professional and personal lives of Bollywood star wives—Maheep Kapoor, Seema Khan, Neelam Kothari, Bhavana Pandey—and gives a glimpse into the lives of some of the most famous, like Shah Rukh Khan and Gauri Khan.

‘She,’ a Hindi crime thriller drama web series, is getting ready to release its second season. It will pick up right where the first season left off, and will be released in the first quarter of this year. Aaditi Pohankar, who has worked in Hindi, Marathi, and Tamil films, plays the female main character in this web series.

Made In Heaven Season 2 is an Amazon Prime Indian romantic drama web series produced by Zoya Akhtar. The first season of the show premiered in March this year. Since then, it has received a lot of positive response from the public. Story based on Tara and Karan, two wedding planners from Delhi, run a company called Made in Heaven. the second season expected to release soon in 2022.

Season 1 of Naxalbari performed an amazing job with a realistic storyline and concept. Season 2 has a good possibility of working because the first season left some unanswered questions. However, there has been no official confirmation concerning the release date of Naxalbari Season 2 from Zee5 or the producers. However, the second season is expected to be released around the end of 2022.

Mirzapur is one of the most popular web series in the history of Indian web series. The previous two seasons were fantastic, and we expect the third season. The star cast has yet to be revealed by Amazon Prime or the producer, this upcoming series, like the second season, will be the most eagerly anticipated. It has grown to become one of India’s most popular web series. The second season concluded with a dramatic suspense when Munna was shot by Guddu Pandit, and the situation worsened when the hunt was extended for the third season.

Sakshi Tanwar plays a middle-aged housewife who gets entangled in the maze of white-collar crime and politics in this drama. After the formal announcement of the release date, Mai has already generated a lot of hype.

Following the great success of Scam 1992: The Harshad Mehta Story, SonyLiv will continue the Scam franchise with Scam 2003, the sequel to the critically acclaimed Scam 1992. Hansal Mehta will also helm the second season, according to OTT platform SonyLiv and Applause Entertainment.

Following the success of the first season of ‘The Test Case,’ which starred Nimrat Kaur as Captain Shikha Sharma, Harleen Sethi is set to reprise her role as a strong and fierce character in the second season. The storyline of season 2 revolves around a female army officer who is in a relentless search for a mysterious man in her bid to find redemption.

Fear 1.0 is an upcoming Indian-Hindi supernatural thriller television series starring Tisca Chopra, Saurabh Shukla, and Rajesh Tailang that will premiere on DisneyPlus Hotstar. Tisca Chopra’s makeup in the photo she uploaded seems so natural that the bruise marks on her hands and cheeks appear to be real. She wished her Instagram followers a happy morning and provided an update on her Fear 1.0 shoot.

Answer. Following is a list of our favourite and best top 10 high-rated web series to watch in India 2021:

The listed above series is one of those that one definitely must watch.

Question 2. What are the 5 upcoming Indian web series on Amazon Prime Video?

Answer. Here is a list of 5 upcoming Indian web series going to stream on Amazon:

Question 3. What are the newly released web series?

Answer. Here is a list of 10 newly released series:

Question 4. What is the list of upcoming Indian Web Series on Netflix?

Answer. The list of upcoming Indian web series on Netflix is as follows:

Question 5. What are the must-watch Web Series?

Answer. We have listed out a few must-watch web series for you:

Upcoming Web Series and Movies in May 2022

Best ways to craft and compel your own brand’s story