by Anurag Tiwari
in News, Launchpad 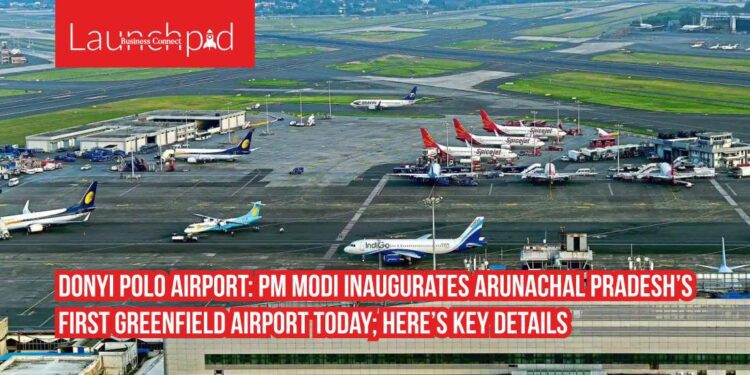 According to an official statement, the terminal at Hollongi has been constructed at a cost of approximately INR 955 crore, has an area of ​​4100 square meters, and has a maximum capacity to handle 200 passengers per hour.

Arunachal Pradesh’s first greenfield airport has been constructed at a cost of over INR 640 crore. This airport has been developed in an area of ​​more than 690 acres. The airport is suitable for all weather operations with a 2,300-meter runway.

An official statement said the airport terminal is a modern building, that promotes energy efficiency, renewable energy, and the recycling of resources. Donyi Polo Airport will be the third operational airport for Arunachal Pradesh, taking the total airport count to 16 in the North-East region.

From 1947 to 2014, only nine airports were built in the North-East. Since then, in a short span of eight years, the Modi government has built seven airports in the Northeast.

The name of Donyi Polo Airport (Itanagar Airport)reflects the traditions and rich cultural heritage of Arunachal Pradesh and its age-old indigenous reverence for the Sun (‘Donyi’) and the Moon (‘Polo’). It will be Arunachal Pradesh’s first airport with a runway of 2,300 metres, making it possible for the Boeing 747, one of the largest passenger aircraft, to land and take off.

On October 18, Indigo Airlines performed a successful test landing of one of their planes at the newly constructed airport. Airports in five northeastern states, namely, Meghalaya, Sikkim, Mizoram, Arunachal Pradesh, and Nagaland have seen flights take off for the first time in 75 years.

Person of the Month - Elon Musk