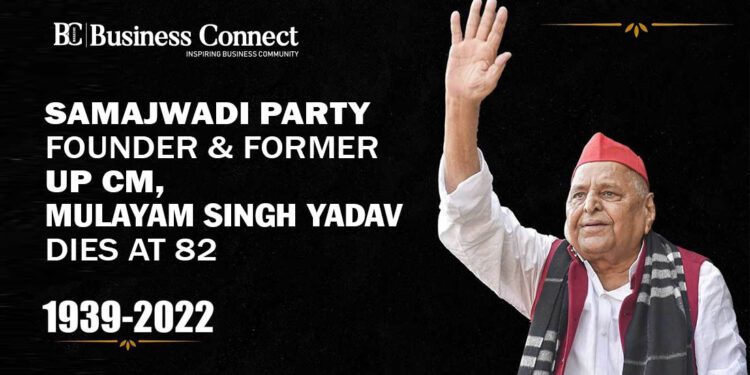 Samajwadi Party founder and former UP CM Mulayam Singh Yadav passed away on Monday (October 10). The veteran politician died after spending several days in the ICU of Medanta Hospital in Gurugram, where his condition was critical.

“My respected father and everyone’s leader is no more,” Akhilesh Yadav said.

According to reports, former UP CM Mulayam Singh Yadavbreathed his last around 8:15 am on Monday (October 10). Singh was suffering from a urinary infection.

82-year-old Mulayam Singh Yadav had been under treatment at the hospital since August 22 and was shifted to the ICU on October 2 when his condition became critical. According to reports, he will be cremated in Saifai, Uttar Pradesh.

Mulayam Singh Yadav, who was active in politics for more than 55 years, was born on 22 November 1939 in Saifai, Etawah district. He did his MA in Political Science. He reached the assembly for the first time in 1967 after being elected MLA from Jaswantnagar in UP and then he never looked back in his political career. He was elected MLA eight times and became a Lok Sabha MP after getting elected seven times. In 1996, he also got the opportunity to become Defense Minister in the United Front coalition government.

Mulayam Singh Yadav’s political career has been very illustrious. In 1977, he first became a state minister from the Janata Party, while in 1989 he became the CM of UP for the first time. After this, he became the Chief Minister of Uttar Pradesh for the second and third time in 1993 and again in 2003. Mulayam Singh founded the Samajwadi Party in 1992 and formed the government in 1993 with the Bahujan Samaj Party(BSP).