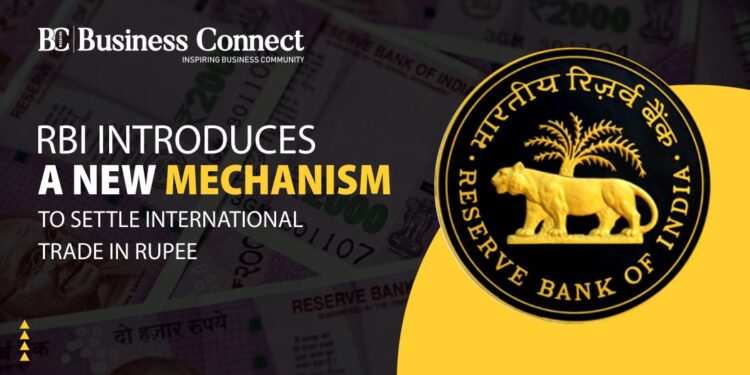 The Reserve Bank of India (RBI) has established a system to settle commercial activity in rupees in order to foster expansion of global trade with focus on exports from India and to support the rising interest of the global trading community in the rupee.” The central bank’s decision was made in response to mounting pressure on the Indian rupee following Russia’s attack on Ukraine and restrictions imposed by the US and the EU.

Reasons Behind it
The RBI system is intended to make it easier for importers and exporters to get over restrictions that bar using a major currency such as the US dollar for commerce with particular nations. Numerous nations have placed sanctions on Russia after its invasion of Ukraine. The new system can be used by Indian enterprises who are searching for other ways to pay for imports.

“From India’s perspective, it’s a wise decision. We will save foreign money under the new system since we import more than we export. For instance, we would have had to pay Russia in dollars for oil imports under normal conditions, but now we can do it through the rupee-rouble way,” said Madan Sabnavis, chief economist at the Bank of Baroda.

How It will Function
The RBI stated all exports and imports under this arrangement may be denominated and invoiced in rupee (INR) in a circular sent to commercial banks on Monday. Without naming any nations, the RBI stated that the “exchange rate between the currencies of the two trade partner countries may be market determined.” According to the central bank, rupee Vostro accounts can now be opened in India by AD (authorised dealer) banks. As a result, AD Bank in India may open special rupee vostro accounts of correspondent banks of the partner trading countries to settle trade transactions with any country.

A senior private sector banker explained that Russian banks that are not on the OFAC (Office of Foreign Assets Control) sanctions list will be able to create Vostro accounts in India, and anytime exports or imports occur, that account will be debited or credited, depending on the transaction. Indian banks have long anticipated that the government and the RBI will come up with a different payment system, much like they did when Iran sanctions were put in place in 2012 and again in 2018.

Authorisation Needed
Regarding the authorization needed, the RBI stated that a partner country’s bank may contact an AD bank in India to create a unique INR Vostro account. “The AD bank will submit information about the agreement to the Reserve Bank for approval. The special Vostro Account’s AD bank will make sure the correspondent bank is not from one of the nations or regions listed in the most recent FATF public statement on high-risk and non-cooperative jurisdictions, for which FATF has asked for countermeasures, the RBI said.

According to the RBI, using the rupee payment mechanism, exporters may obtain advance payments in Indian rupees from foreign buyers against shipments. Indian banks should make sure that any available funds in these accounts are utilised to fulfil payment commitments emerging from already-executed export orders and payments that are on the way before authorising any such receipt of advance payment against exports, it added.

Instructions for the Indian Banks
The Indian bank maintaining the special vostro account of its correspondent bank should, in addition to the usual due diligence procedures, verify the claim of the exporter with the advice obtained from the correspondent bank before paying the advance, it said. This will ensure that the advance is only released in accordance with the instructions of the overseas importer.

The RBI stated that issuance of bank guarantees for commercial transactions carried out under this arrangement is authorised subject to adherence to FEMA notification requirements. According to mutual agreement, the stored rupee excess balance may be utilised for legal capital and current account operations. In the meantime, Exporters are somewhat in the dark regarding how the strategy will be put into practise, including the partner nations and the potential covered products.

Best Finance Books of All Time