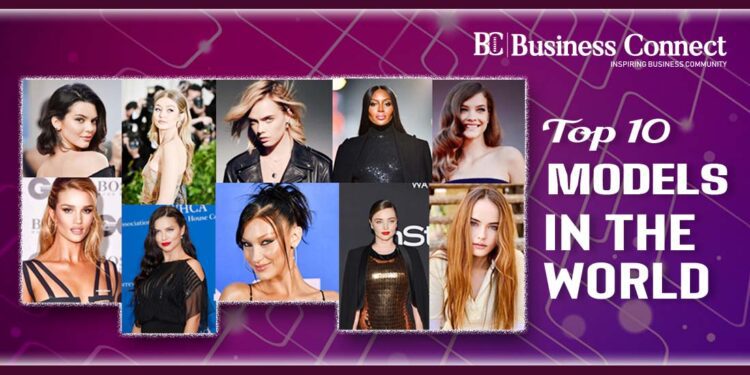 Can you imagine a world without fashion? A world without clothes and makeup. The answer will always be a big ‘no’ and hence there is no dearth of models in the world. But becoming a model is not an easy task as they have to hide their emotions like happiness, sadness, and anxiety while walking.

Models help to advertise a variety of products, including clothing, cosmetics, food, locations, and cars. Advertisements can be through magazines, television, newspapers, catalogs, billboards, and online. When it comes to choosing the top 10 models in the world, it is very difficult. Nevertheless, in this article, we are telling you about the top 10 models in the world, whose status is in every corner of the world.

Kendall Nicole Jenner (born 3 November 1995) is an American model, media personality, and socialite. She is the daughter of Kris Jenner and Caitlyn Jenner and rose to fame on the reality television show Keeping Up with the Kardashians. Jenner started modeling at the age of 14. In 2017, Kendall Jenner was named the world’s highest-paid model by Forbes, ousting model Gisele Bündchen, who had been leading the list since 2002.

Jelena Noura”Gigi” Hadid is an American model, television personality, and founder of the clothing line “Guest in Residence”. She debuted in Models.com’s Top 50 Model Ranking in November 2014. The British Fashion Council recognized her as the International Model of the Year in 2016. Hadid has made 35 appearances on the cover of Vogue magazine around the world in four years. Gigi Hadid has an estimated net worth of $29 million.

Cara Jocelyn Delevingne is an English model, actress, and singer. She first signed with Storm Model Management before moving to IMG Models. Delevingne won Model of the Year at the British Fashion Awards in 2012 and 2014. She is a renowned model known for her work with top designers and houses including Zara, Chanel, Burberry, H&M, and many more. Cara Rimmel became the face of YSL and Marc Jacobs.

Brazilian model Adriana Lima gained notoriety as a Victoria’s Secret Angel from 1999 to 2018. She was named the “Most Valuable Victoria’s Secret Angel” in 2017 and was the longest-serving model. She has worked for fashion brands such as Armani, Bebe, BCBG, Versace, and Louis Vuitton. She has also appeared on the covers of fashion magazines such as Elle, Harper’s Bazaar, GQ, Arena, Vogue, V, Esquire, and French Revue des modes.

Rosie Alice Huntington-Whiteley is an English model and actress. She has worked for many including Burberry, Ralph Lauren, DKNY, and Victoria’s Secret. Rosie walked in five consecutive Victoria’s Secret Fashion Shows. She was an angel from 2009-2010.

Isabella Khairiah Hadid is an American model. Hadid’s first modeling job was for a Flynn Skye commercial project when she was 16 years old. In 2016, Bella Hadid was voted “Model of the Year” by industry professionals for Models.com. Hadid has made 27 appearances on worldwide Vogue magazine covers in the last four years. Today, Bella and her sister Gigi Hadid are the most sought-after and highly paid models on the planet. In 2017, Bella earned $6.5 million. In 2018, Bella earned $8.5 million.

Naomi Elaine Campbell is an English model, actress, singer, and businesswoman. She started her career at the age of 15, and she established herself amongst the most recognizable and in-demand models of the past forty years. In 2007, Naomi Campbell walked the catwalk for Dior’s 60th-anniversary fashion show at Versailles. Naomi Campbell also worked with Nelson Mandela Children’s Fund, for which she organized a benefit Versace fashion show in 1998.

Miranda May Kerr is an Australian model and businesswoman. In 2007, Kerr gained notoriety as a Victoria’s Secret Angel. In addition to representing the Australian department store chain David Jones, Kerr was the first Australian Victoria’s Secret model. Kerr has launched her brand of organic skincare products, Kora Organics, and has written a self-help book. Miranda May Kerr worked with many international brands, including Baby Phat, Levi’s, L.A.M.B., Betsey Johnson, Neiman Marcus, and Roberto Cavalli. Kerr also appeared in the pages of “Vogue” in her native country.

Barbara Palvin is a Hungarian model. In 2016, she made her debut in the Sports Illustrated Swimsuit Issue. She became a Victoria’s Secret Angel in 2019. She is also an Armani Beauty ambassador.She worked with many international fashion magazines’ covers such as Elle, Jealous, L’Officiel, Glamour Hungary,Marie Claire, Vogue, Allure, and Harper’s Bazaar. The magazines were published in Europe, Asia, the USA, and South America.

Kristina Ruslanovna Pimenova is a Russian model living in the United States. Kristina is mainly famous for her appearance in brand endorsements of renowned brands like Burberry, Armani, and Roberto Cavalli. The well-known magazine Women Daily Magazine called her the most beautiful girl in the world in 2014. In 2015, she has also featured on the cover page of a popular magazine named Vogue Kids. Kristina Pimenova is only 16 years old, but she has already worked for Vogue and Armani, and has more than two million followers on social media.

Who are the top 10 models in the world?

The top 10 models in the world are as follows: –

Who is the best model in the world?

Kendall Nicole Jenner (born 3 November 1995) is an American model, media personality, and socialite.Jenner started modeling at the age of 14. In 2017, Kendall Jenner was named the world’s highest-paid model by Forbes, ousting model Gisele Bündchen, who had been leading the list since 2002.

Who are the top 10 models in India?

The top 10 models in India are as follows: –

Who is the youngest catwalk model?

Celai West (age 14 years) is a model, actress, author, activist, and CEO. At just 10, she was the youngest professional runway model to walk in New York Fashion Week (NYFW).

Who is the highest-paid female model in 2022?

The highest paid female model 2022 are as follows: –

What is the leading fashion magazine?

The leading fashion magazine are as follows: –

Which is the fastest growing business magazine?