by fanzineindia
in The Leader Behind an Admirable Company 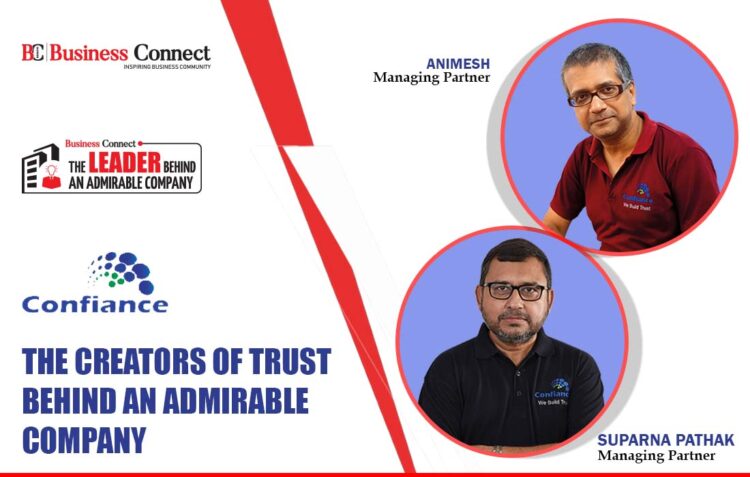 Confiance: The Creators Of Trust Behind An Admirable Company

His garage is about a five minutes’ walk from his home. Negotiating the crowded walk while talking on his hands-free with a client, he was thinking of something else. The project has been hanging fire for a long time. Will his team be able to finally deliver?

While Animesh was about to get into the car, his partner, 14 years senior to him, was in the pool stroking away his daily routine 30 minutes and thinking about the strategic benefit of a contract they were scheduled to sign in the afternoon.

But in another part of their brain, they were worried about the big delivery that was scheduled to close that day. There were finer edges to polish and they just had about five hours to box the product. They had no way of knowing as yet the project lead, a recruit with more than a decade of industry experience would drop out due to illness in the family.

About half an hour before Animesh put the key into his car’s ignition, the team had started trooping into Confiance Mobility LLP. Tucked innocuously in a cozy flat in the middle- class neighborhood of Salt Lake, a stone’s throw away from the Sector V – the IT hub of Kolkata – the office would be home for them till the wee hours of the evening.
Animesh Goswami, who insisted that we call him Animesh, is an IIT alumnus and has 25 years of experience in the global IT industry, 14 of which were spent abroad. He junked his IT career in 2014 with the dream of creating a communication firm that would use technology as a tool.

Suparna Pathak– a household name in the state and a media veteran, who also teaches strategic management in various institutions here and abroad, and is fondly referred to the business reporting community as the Viswa Pitamah for his ever helping and no malice attitude, junked fame and money in 2017 to join Animesh as his senior partner.

“It was a chance meeting in 2017 that sealed my fate. I had however decided to explore the digital media option as an entrepreneur even before that fateful meeting in the Kolkata Press Club. I liked his brash attitude that matched mine and decided to take the plunge, says Suparna

That day in their office appeared a disaster. With the lead having bunked then Animesh had to be on the work floor tying knots while Suparna was seen banging away on his Mac. There were shouts that one associates more with a newsroom than a company of this nature. Animesh quipped, “Told you. We are a creative agency!” Not to be left behind Suparna bantered, more like re creative. It’s a circus and we are the jokers in it.”

Meet them and you would think that this partnership is going to break by the time the Sunsets as they are similar to cheese and chalk yet they gel well. If Animesh is the core energy then the portly Suparna is the eye of the storm gently trying to nudge that energy towards the intended direction. The work floor thinks the same. On being asked about their bosses in one sentence, the core of the feeling was, “Animesh sir knows how to get things done, Suparna sir is the guide we look up to.”

As they took a turn in explaining their business, we could feel the tension building up in the workplace with the clock ticking towards the delivery deadline. The animation vertical came with a problem, clearly disapproving of our presence, followed in turn by the content lead and the designer while the developers were cooling their heels on the floor seeking time from their bosses busy talking to us. But there was an air of affable scoffing that was quite strangely endearing.

“We are more about 360-degree brand building and communication refurbishing”. In the words of Animesh, Confiance takes disruptive views about brand creation using various technologies, including the traditional route. The focus of the entire exercise is narration. How you narrate the brand clinches the issue. “How one weaves the sentences, how one drives the creation of logo so that it syncs with the narrative and then comes the tech part that becomes the final and composite messenger of the whole exercise – this process makes it a creative challenge. Most of us in the trade tend to forget that the strength of social media is determined by the strength of your content.”

When a client comes to them with a problem of reach out, the first thing that Confiance does is understand the stakeholders and audience before carefully auditing the existing tools being used and then draws up a strategy map that may involve redrawing the entire existing reach-out mode, including redrawing the website and recreating the apps should the situation so demands.

“We, however, are clear about one thing. We try to steer ourselves clear of poaching,” says Suparna. They find it unethical. They claim that there have been instances of sitting down with a client’s existing service providers trying to optimize the efforts of all the vendors to maximize the benefit of the client concerned. “It has direct brand implication for Confiance which in French means trust. We do believe in building trust within the entire consortium.”

“We provide our clients with a tailored push when it comes to digital communication,” says Animesh. With their years of experience in the industry, they are quite articulate in every view they offer. Suparna is a known face in the business seminar panels, while Animesh is similarly known for digital media seminars.

Explaining the ethics of their business, they claim that they abhor leveraging their clients’ credulity. Talking about a big ornament company which sought their consultancy, Animesh recounted, “the owner was happy with the digital push of their brand. I analyzed the response only to find most of the hits were from abroad and non-generic.” Animesh believed those responses to have been bought with no commercial implication for the company concerned. “And this is something we don’t do. A company with only brick and mortar showrooms in India cannot have, say an Armenian buyer living in Armenia! If it’s not riding on the credulity of a client, tell me what is?”

How good are they? Mr. Manohar Malani is known for his sharp mind among those who know him in the industry and is working on something that is already showing potentials of turning out to be the next significant solution for SME business. He has roped in Confiance as his communication partner and he swears by them. He says, “The Confiance team ensured that we are not trapped in the confirmation bias and think about communication from a fresh perspective.”

A similar sentiment is echoed by Mr. Debotosh Chatterjee, Managing Director of CCASPL – a facility services business with around 5000 staff on payroll. He has been supporting Confiance since its inception and is best placed to qualify his consultants. Not known for hedging his words he says, “Confiance helped me to digitize the business processes for our organization to navigate through the future challenges.” A measured statement, yet it speaks volumes about the brand the start-up has built for itself. It was nearly five when Animesh begged to be excused to go out into the floor while we nursed our tea and engaged in small talks. Minutes later, when we were into our last sips of the tea, Animesh came in all smiles. He just looked at his partner and we could all of a sudden realize how tense these two were though the entire talks. We also realized that how even chalk and cheese could collaborate given how they continuously kept silently communicating with each other.

What is your USP? We asked. As if on cue they blurted, “Us.” Not mincing their words, they pointed out their strategic advantage. They claimed that their USP lies in their ability to articulate both with narratives and technology. Among similar providers, most were focused on the tech part of it because they found comfort only in that and soft paddled the narration. Some others focused on the narration and couldn’t leverage the technology with equal ease. Confiance was among the very few who were equally nimble with both, given the promoters’ professional experience in the related fields.

Banglanatak Dot Com is a well-known social enterprise working with the grassroots as well as global entities. Confiance has been their preferred choice for a few years now. Ms Ananya Bhattacharya, director, Banglanatak Dot Com endorsed what Animesh and Suparna claimed. In her words, “Confiance is an admirable company – We have been using their services to connect rural communities to the wider world – strengthening access to local culture for global community via website, social media and mobile app.” From the content narration perspective, the animation wing of Confiance also contributes for the projects.

It was 7:30 pm when we left with both the partners. The floor was still abuzz with the clanking on keyboards while on the monitors we could see codes being developed, designs being drawn and texts being written. We were informed that while talking to us Suparna was finishing a 1500 word narrative!

However, there was one area we were just allowed a peak – the animation room. We were told that the people there were a bit xenophobic and even the partners had to knock before entering!
Yes! Chalk and cheese, should they want, can indeed tango. 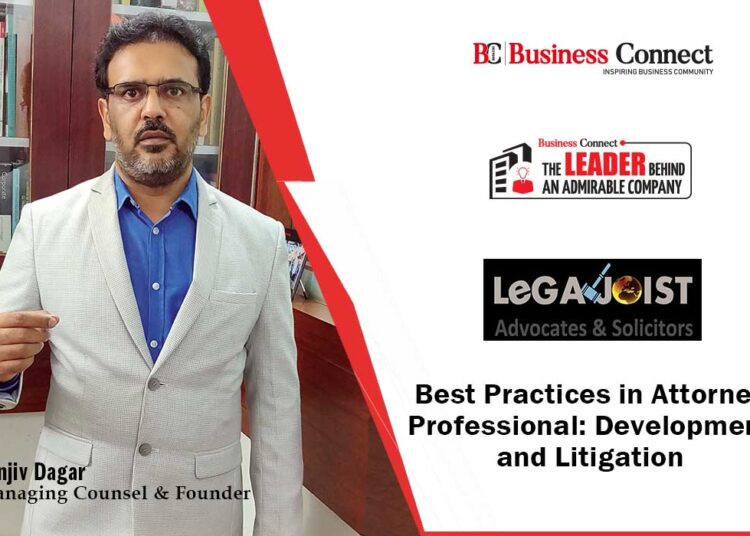 The Leader Behind an Admirable Company

Best Practices in Attorney Professional: Development and Litigation A Good Lawyer knows the law, but the best lawyer knows the... 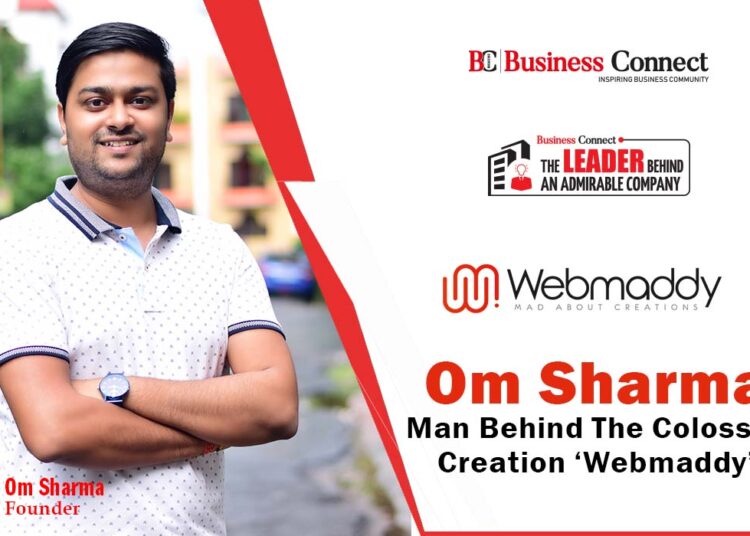 The Leader Behind an Admirable Company

OM SHARMA: MAN BEHIND THE COLOSSAL CREATION "Webmaddy" Warren G. Bennis to inspire said, “Leadership is the capacity to translate...