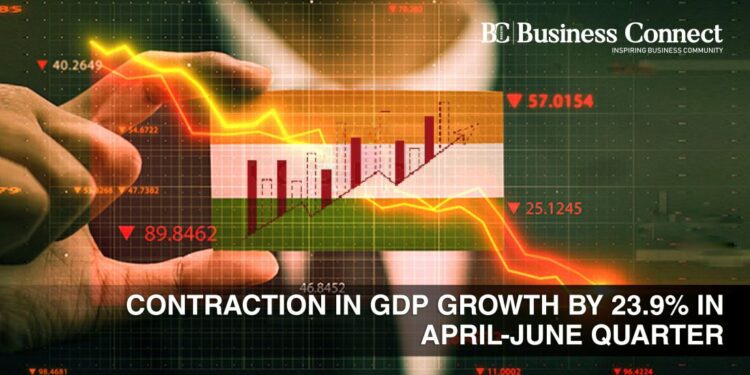 Contraction in GDP Growth by 23.9% in April-June Quarter - Business Connect

According to the data released by the (NSO) National Statistical Office, which comes under the (MoSPI) Ministry of Statistics and Programme Implementation, India’s (GDP) Gross Domestic Product for the April-June quarter (Q1) was slipped by a massive 23.9 percent.

This is the first GDP contraction in more than 40 years, as according to the National Statistical Office (NSO), the (GVA) Gross Value Added came in at -22.8 percent.

The Gross fixed capital formation was down by 47 percent year-on-year (YoY), while the government final consumption expenditure was up 16 YoY.

The GD P numbers could upset the government’s fiscal math that could force major changes in the public finance estimates. Now the focus will shift to the September quarter. Going through the July core infra number of -9.6%, the quarter for September may also record a high single-digit decline in GDP on a YoY basis. Though the rural economy has balanced the slowdown in urban areas in Q1 to some extent, recovery of rural is unlikely to support such pace in subsequent quarters. The one reason for this is that Covid-19 has started to penetrate rural areas at a fast pace since July.

The recovery path of India appears likely to be a long and hard one. A mix of monetary and fiscal measures to pile up the economy that has fallen short so far. Some kind of innovative thinking by govt/RBI along with some good providence are required to turn the tide quickly.

According to the Centre for Monitoring Indian Economy (CMIE), salaried jobs have suffered the most during the lockdown, with a total loss estimated to be at 18.9 million during the first quarter.