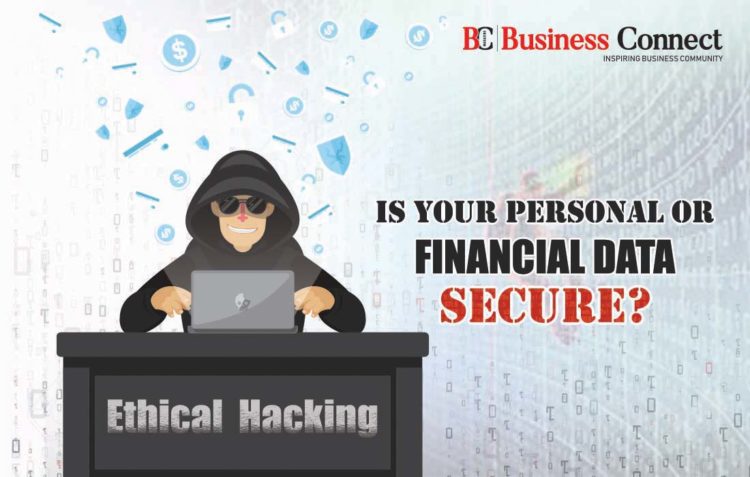 Is Your Personal or Financial Data Secure - Business Connect

With the modern digitalization revolutionizing today’s business world, it’s very important than ever to remain vigilant against hackers or crackers or hacking. According to the recent World Economic Forum report 2019, cyber-attacks and data breaches have become a regular occurrence and are the fourth and fifth most consequential risks facing the business world today. The recent cases of biggest data breaches of the 21st century in companies having vast user data like Yahoo, Marriot, Under Armour, The Facebook (Cambridge Analytica), Equifax, eBay, Dixons Carphone, Ticketfly, My Heritage, Google Plus to name a few, provides the evidence of weakness in the areas of cybersecurity and data protection.

In India, the data breaches made in the Aadhaar database in 2018 potentially compromised the personal information of around 1.1 billion registered citizens. Altogether, for these reasons Ethical hacking or offensive security which is generally conducted in a structured and organized manner, is now being adopted by organizations despite size or industries to prevent their customer’s privacy and trust. It was just a few years ago that the open discussion or dissemination of knowledge of hacking techniques was considered illegal.

But, recently, with the globalization as the world is getting smaller, people have started understanding the vast importance of Ethical Hacking as it provides security services to the private data of corporate and government clients in the Nation’s most critical sectors like defense, law enforcement, intelligence, finance, and health care. Nowadays, because of the vast library of user data of large companies like Facebook, Banking and other Social media sites have been the prime targets for hacking.

What is Ethical Hacking?

An ethical hacker is also known as a “white hat hacker” or simply “white hat” is a person who is hired and permitted by an organization to attack its system for the purpose of identification of susceptibilities, which an attacker might take advantage of. The term “black hat” is used for malicious hackers or crackers who utilize their skills for illegal purposes. The whole difference between the terms “hacking” and “ethical hacking” is the permission or the attacker’s motivation. Other terms used for ethical hacking are Penetration testing/ Pen-testing/ PT. Penetration testing is the legal and licensed way to locate and successfully exploit computer systems for the purpose of making those systems safer.

With the growing computer science industry, Internet computer security has risen as a major concern for business organizations and governments. Organizations use the Internet to their advantage by utilizing the Internet as a medium for e-commerce, e-learning, banking, mobile, advertising, information distribution, and access, embrace new technologies like cloud computing as well as other ventures. However, they remain worried about hacking which could lead to a loss of control of private and personal data regarding the organization, its employees, and its clients.

Evaluation of security threats is important or ethical hackers use the same tools and techniques as an attacker and report the susceptibilities they found and provide the necessary instructions for how to remedy them.

Dan Farmer from Elemental Security and Wietse Venema from IBM were the pioneers of ethical hacking programs. Farmer and Venema developed an easy-to-use application free for download called Security Analysis Tool for Auditing Networks, or SATAN, which received a great amount of media attention due to its capabilities and implications. The SATAN tool provides auditing and advising capabilities to provide computer security.

The major challenge being faced in today’s business is the pace by which the cyber world is growing and the convolution of security requirements. The hacking techniques are evolving day by day and only an expert professional can take over the challenge to get rid of the problem. So, Ethical hackers are in demand in today’s business world.

Why do we require Ethical Hackers for business?

With the rapid advancement in Information technology (IT), computer security has become important to avoid theft of sensitive information at all levels of the organization. This has increased importance for candidates and companies to be trained and certified in Ethical Hacking. The Certified Ethical Hacker (CEH) program is governed by the EC Council for authorizing professional hackers. Because of these genuine reasons, the importance of CEH has heightened in businesses world across industries globally.