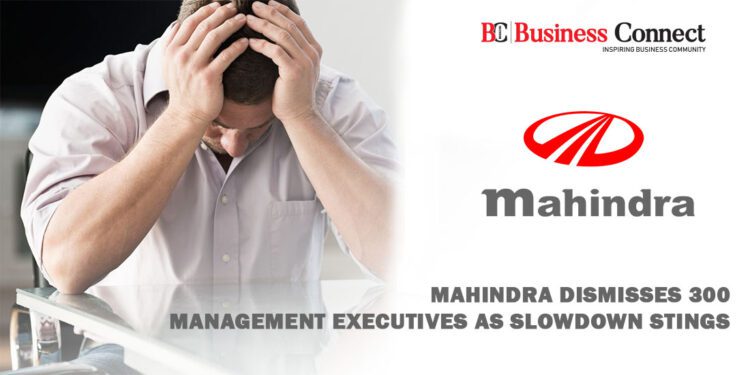 The homegrown auto major Mahindra & Mahindra, in a key restricting move has fired around 300 management executives since the start of this calendar year as the slowdown in the domestic automotive industry worsened with the pandemic taking its toll.

The automotive division of Mahindra, which was suffering the effect of the layoffs, has suffered a devastating 27.52 per cent weakening in sales in this fiscal so far. Industry volumes have shrunk by 13.2 per cent.

In the exit of many senior management executives VS Parthasarathy, who was the President of the mobility services sector of Mahindra and the member of the group executive board is also included, being part of the nearly 300 executives that have been dismissed by the company since January. Other senior-level executives listed in Prahlada Rao, who was head of business planning at Mahindra.

CHRO, Automotive and Farm Sector, M&M Ltd, Rajeshwar Tripathi stated that “Future-ready, as well as transformational work, is underway within the company. An initiative has been taken up for simplifying the organization for greater agility, accelerated growth as well as higher productivity.”

“The initiatives have carried out in an associate-friendly manner. There have been some redundancies, but in almost all cases the company offered alternate positions. In a handful of cases, difficult decisions had to be taken to separate.”

A senior Mahindra Executive stated that “This is nothing short of a war of attrition that is unheard of in the group even in the days following the 2008 global recession.” “Almost 300 executives have been fired since the beginning of the year. It is brutal. The morals are really poor.”

It was added by the executive that “Parthasarthy was the old hand of Mahindra. The way he was shunted is impossible to imagine. This is not the old Mahindra.”

The company added that the workers in its industries, which are mostly part of a union, have not been touched. Nor has there been any adjustment of the compensation for the top management rank.

Tripathi added that “There were no partings in the division of staff. No rationalization or wage cuts have been made at any stage. Also in 2020, a tough year due to the pandemic, we declared wage increases at all levels and charged maximum performance compensation.”

“As you know, the Mahindra Group has a rigorous system of managing talent. Nurturing and growing inner talent is highly motivating and encouraging to associates. We agree that our strategy of shifting internal talent to key roles continues to serve us well.”

Besides the dismissal though, a proper reorganization is also underway. Executives are being moved around as a precursor to being sidelined as well as potentially fired.

“For the time being, it is limited to Mahindra Auto and the Farm Division, but there is a solid indication that it will be spreading to Mahindra Research Valley,” said another executive. “The impression is that those who worked on projects with Ssangyong and Ford would be the first to go.”

Mahindra is actively looking for a buyer for Ssangyong, a South Korean business that, it purchased in the year 2011, but failed to turn around. The ill-fated attempt at a joint venture relationship with Ford Motor Corporation of the US has also come to nothing recently.