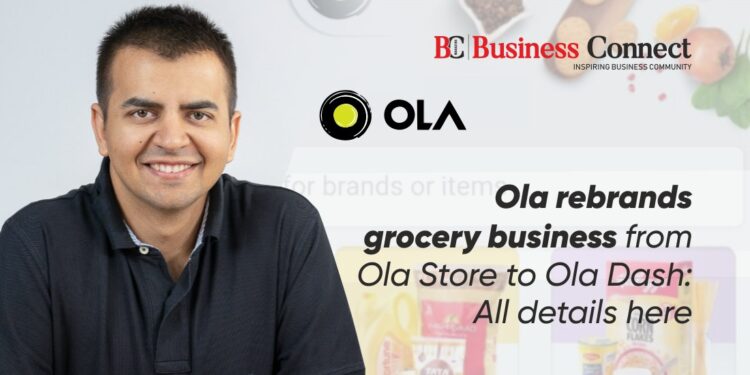 According to people familiar with the rebrands decision, with an aim to bring the element of speed in the name itself, ride-hailing company Ola has renamed its express grocery delivery business as Ola Dash. It was formerly known as Ola Store when it was first launched last year (2021).

Ola has set aside INR 250 crore for its grocery delivery service, which it aims to introduce in mid-November, ahead of its $2 billion IPO, according to reports.

According to reports, the company has already expanded its operations to six cities: Delhi, Mumbai, Bangalore, Pune, Hyderabad, and Chennai, and is processing 6,000-8,000 orders each day from over a hundred dark stores.

Following the debut of a food delivery service in March of the same year, the ride-hailing business established a separate online grocery shop in Bengaluru in July 2015. The firm intended to deliver products between 9 a.m. and 11 p.m. using its cabs and drivers.

It shut down both the Ola Store and Ola Foods divisions within nine months of their opening, without explaining. This comes only weeks after competitor Grofers changed its name to Blinkit, meaning that it intends to deliver items in the blink of an eye. In the grocery business, the firms compete with Zepto, Swiggy-owned Instamart, Reliance-backed Dunzo, and Tata-owned BigBasket, among others. Ola Dash is comparable to DoorDash, an American quick delivery firm with a market valuation of more than $39.94 billion.

Jokr, Getir, Gorillas, and other startups have cropped up all over the world, offering 10-minute delivery in places like New York, Turkey, and London.

The on-demand economy has exploded in popularity in recent years. Grocery delivery is a very popular and sought-after service among consumers. Grocery retailers and chains are being compelled to enter the online grocery market to better serve their clients.

Grofers, Bigbasket, and other online food startups in India raised more than $120 million last year. Due to people’s hectic schedules and the increased popularity of online shopping, the grocery industry is nevertheless profitable today. The online grocery business will continue to rise day by day as the number of smartphone users grows and buyers acquire trust.