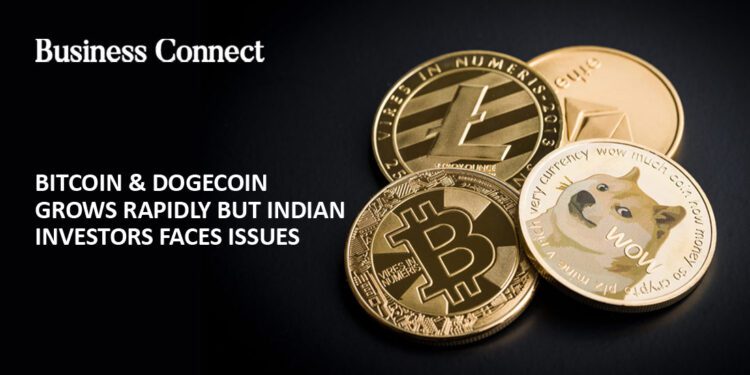 Several investors and industry analysts believe that blockchain will change the way people pay in the future. Bitcoin and Dogecoin are well-known cryptocurrencies. This month, Dogecoin has already returned over 1000 per cent to investors, including billionaires, celebrities, and athletes. Elon Musk – the CEO of Tesla, and Mark Cuban – the owner of the Dallas Mavericks, feel that cryptocurrencies are here to stay. The rapper – Snoop Dogg, Gene Simmons – singer of Kiss, and Guy Fieri – a restaurateur, have all joined the Dogecoin bandwagon.

Both digital currencies have grown exponentially in India, but investors have been let down by trading platforms that appear to be inadequate. Investors are enraged due to a lack of proper infrastructure, failure to accommodate increased traffic, and inconsistent tie-ups with banking partners.

Last week, WazirX, India’s largest cryptocurrency trading site, crashed after Dogecoin hit an all-time high of ₹48. Many investors took to social media to express their dissatisfaction with their inability to complete transactions and thus lose out on future gains. Many others were irritated as well because they were unable to add money to their wallets.

Nischal Shetty, the company’s CEO, tweeted that the site is under work in progress, in order to address the issues.

“The team is also working on advancing the DOGE/INR trading experience. Other markets are operating normally. We’ll take care of the problems as soon as possible.” “I’m not going to rest until then,” he had tweeted. The problem, on the other hand, isn’t limited to a busy investment day. Users are often unable to add money to their wallets, even on an average day. Banking partners have been blamed for the same thing.

WazirX isn’t the only one with problems. Coinswitch Kuber, which is another trading site that recently went all out with its marketing campaign, has completely stopped INR transactions. Users would be unable to trade in Indian rupees as a result of this. Both UPI and net banking transactions are affected.

“Due to unavoidable issues with our banking partner, we have temporarily disabled all INR deposits. We apologise for any inconvenience that has been caused by this, and our team is working to resolve the issue as soon as possible.” On 21st April, it tweeted, “We will be updating here as soon as we will be enabling the INR deposits again.”

The platform stated in another tweet toward the end of April that it has yet to allow the transactions but is working on it. The transactions have not yet begun.

Again, potential trading opportunities are being missed by interested investors. Most platforms only list a small number of tokens or cryptocurrencies, limiting investment opportunities.

There are also other topics that are in need to be considered. And if there is a balance in the wallet, it is not shown to the user. OTP authentication is also proving to be a major headache for investors. Many people are able to overcome these obstacles and purchase cryptocurrency, but certain orders are not fulfilled.

While it’s understandable that the crypto industry is still getting its bearings in the region, the current infrastructure is severely failing investors. Some of these issues are very simple, and if the crypto ecosystem is to expand, they must be resolved as soon as possible.