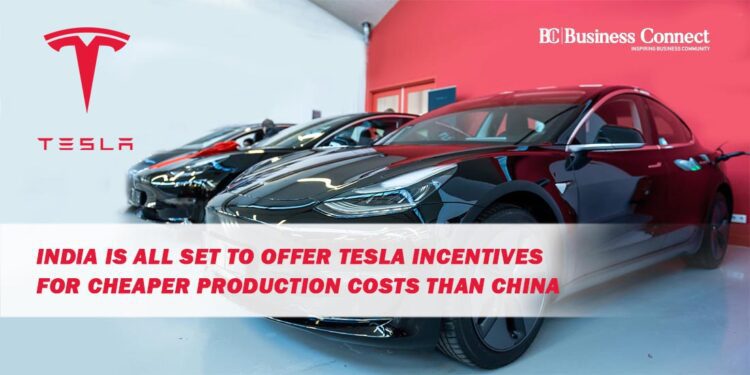 New Delhi: Union Minister Nitin Gadkari stated that India is prepared to give incentives to ensure Tesla Inc’s cost of production is lower than in China if the carmaker commits to manufacturing its electric vehicles in the region.

Gadkari’s pitch comes just weeks after Elon Musk’s Tesla registered a business in India, paving the way for the company to enter the country as soon as mid-2021. Tesla plans to import and sell its Model 3 electric sedan in India, according to sources familiar with the situation.

In an interview, Gadkari stated without giving any details of what incentives would be on offer, “In India, rather than assembling the cars, they should be making the entire product in the country by hiring local vendors. Then we can be able to give higher concessions”.

He stated that “When Tesla begins producing cars in India, the government will ensure that the company’s production costs are the lowest in the world, including China. We will make certain of it.”

India wants to increase domestic production of electric vehicles (EVs), batteries, and other components to reduce pollution in its major cities and save money on imports.

This comes as carmakers compete around the world to jump-start EV demand as countries work to reduce carbon emissions.

It will be difficult to persuade Tesla to commit to production in India, as the company did not immediately respond to an email seeking comment on its plans in the country.

Due to a lack of charging infrastructure and the high cost of EVs, India’s fledgeling EV industry accounted for only 5,000 out of a total of 2.4 million cars sold in the country last year.

In comparison, China, where Tesla already produces cars, sold 1.25 million new energy passenger vehicles, including EVs, out of a total of 20 million vehicles sold in 2020, accounting for more than a third of Tesla’s global sales.

Besides, unlike China, the world’s largest auto market, India lacks a robust EV policy that requires companies to invest in the sector.

Gadkari stated that, in addition to being a large market, India could also serve as an export centre, citing the fact that about 80% of lithium-ion battery components are now manufactured in India.

Gadkari stated that “I think it’s a win-win situation for Tesla,” adding that he wanted to talk to Tesla about building a hyperloop between Delhi and Mumbai.

India is working on a production-linked incentive scheme for automakers and auto component manufacturers, as well as advanced battery manufacturing units, but the specifics are still being worked out.

Switching to renewable energy sources and reducing vehicle emissions are seen as critical for India to fulfil its climate commitments under the Paris Accord.