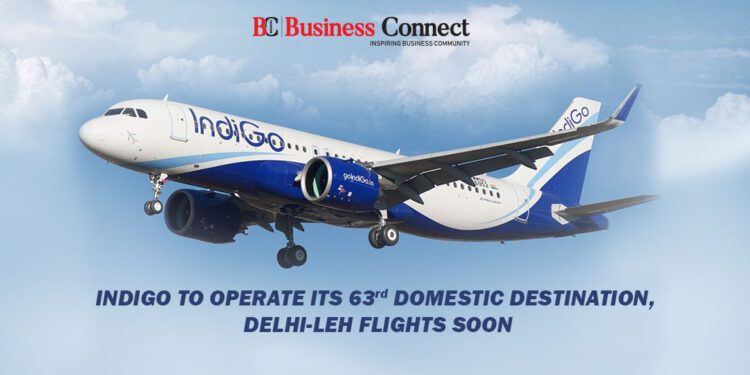 It has been announced by IndiGo that Leh is included to its domestic flight network. The airline will be operating two new daily flights, where one will be from Delhi to Leh and the other one will be from Leh to Delhi. The operation of these flights will be starting from 22nd February 2021 and it is now open for the bookings.

In a press release by IndiGo, it read that “IndiGo, the leading carrier of India has announced its 63rd domestic destination in order to further strengthen up its domestic connectivity.”

The press release also added that “The capital of Ladakh, Leh is famously recognized for its magnificent landscapes, adventurous activities, festivals, crystal clear skies, and Buddhist monasteries.” It has been noted by the company that Leh is an attractive tourist destination, especially between the month of April and September.

The Chief Strategy and Revenue Officer at IndiGo, Sanjay Kumar by announcing about the new flights, stated that “IndiGo is pleased to start with its expansion of domestic network beyond the pre-COVID levels. Amongst the seven regional stations that were announced recently, Leh will be the first destination. The work is in progress towards enhancing regional connectivity, which will not only be increasing access but it will also be promoting domestic trade and tourism in the country.”

It is further added by Kumar that “IndiGo has always been committed on providing an on-time, safe, affordable and hassle-free travelling experience onboard its lean clean flying machine.”

The operation of flight 6E 2016 will be operating from Delhi to Leh. The Leh-bound flight will be taking off at 5:45 am and it would be reaching its destination at 7:20 am. The charge for Delhi to Leh flights will be ₹2,905.

The operation of 6E 2037, which is a Delhi inbound flight, will be departing from Leh at 8:00 am and it would be reaching its destination, the nation capital at 9:35 am. The price for the Delhi-bound flight is ₹2,932.

Both flights, Delhi to Leh and Leh to Delhi will be running daily from 22nd February 2021 onwards.

Venture Briks: When it comes to making a property decision, they will never let you down.

REIN Digital: For A Digital Brand Image That Stands Out

REIN Digital: For A Digital Brand Image That Stands Out