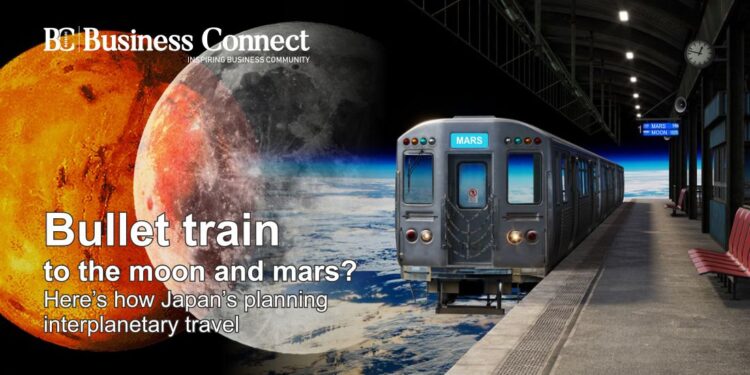 The idea of running a bullet train connecting the moon and Mars from the earth is unthinkable to the majority of the people but not for the scientists of Japan who are planning to build an artificial space colony with bullet trains connecting Earth, Moon and Mars. When other space programmes limit themselves to spaceships, Japan’s scientists have really thought out of the box. With this unbelievable concept, the space travel business is about to see a revolution in coming years.

The plan to construct a man-made space colony with bullet trains connecting Earth, the Moon, and Mars has been announced by researchers at Kyoto University in collaboration with Kajima Construction. This interplanetary transportation system is named “Hexatrack” and the plan can take about 100 years to see the light.

How will it work?

Hexatrack, the interplanetary system, would maintain a gravity of 1G throughout long distance travel so that it can lessen the impact of long exposure to low gravity. There will be hexagonal-shaped capsules in the trains which will be called ‘Hexacapsules’ with a moving device at the centre. A 15-meter-radius mini-capsule would connect the Earth and the Moon, according to the Japanese researchers’ proposal. A 30-meter-radius capsule will be necessary to connect the moon to Mars.

The capsule will employ electromagnetic technology similar to that used in Germany’s and China’s Maglev trains. The railway station on Mars will be known as Mars Station, whereas the station on the moon will employ a gateway satellite and go by the name Lunar Station. It will be situated on Mars’ satellite Phobos. The Earth station, to be called Terra Station, would allegedly replace the International Space Station (ISS)., according to the Human Spaceology Center. According to Mashable India, the space train, also known as Space Express, will run on normal gauge track.

How will the trains operate?

The space railway will connect the bases on the Moon and Mars and run on a standard gauge track. Rocket boosters will be fastened to its front and rear coaches in order to prevent being pulled into planets’ gravitational fields. Additionally, the rockets will help spacecraft accelerate and decelerate. Also, it will feature wings that can be opened or closed.

The importance of terrestrial natural resources is largely ignored by the space transportation system. But scientists at Kyoto University plan to construct a home that will resemble the resources on Earth. The researchers want to create a constricted dwelling structure that resembles a champagne flute, replete with public transit, green spaces, and water features. The structure will be referred to as “The Glass.”

The gravity will be a challenge in this project. The problem with low gravity is that it could affect fertility. The university’s researchers work to tackle this worry. The structure will employ the centrifugal force produced by the spinning of the moon and Mars in orbit to generate artificial gravity that is capable of producing gravity that would be equal to Earth’s environment.

The concept might take a century to become a reality, according to The Asahi Shimbun in Japan. The Marsglass and Lunaglass prototypes, however, are intended to be built in a simpler form by 2050. Yosuke Yamashiki, Director of the SIC Manned Cosmology Research Center and Graduate School of Advanced Integrated Studies at Kyoto University, believes that Japan’s plans for space habitation are essential to guaranteeing that human space colonisation will really take place in the future.

“Through discussions over the past few years, these three pillars that we propose this time are core technologies that are not in the development plans of other countries and are indispensable for ensuring the realisation of human space colonisation in the future,” said Yosuke Yamashiki, the Director of SIC Manned Cosmology Research Center and Graduate School of Advanced Integrated Studies at Kyoto University.