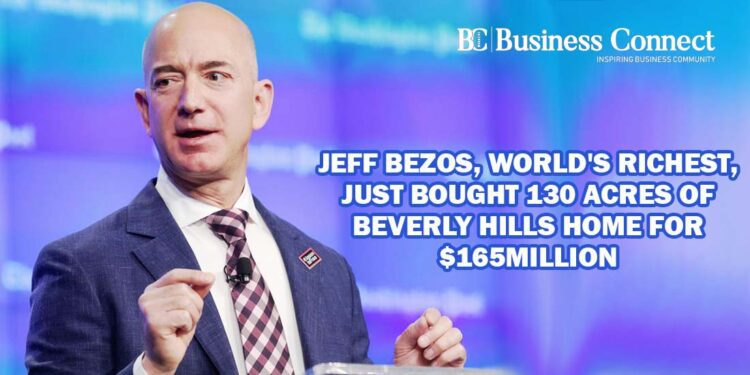 The Wall Street Journal Newspaper recently released a statement that says Amazon founder Jeff Bezos has reportedly spent a gigantic $165 million on the Warner Estate, which spreads out over 130 acres in Beverly Hills in Los Angeles. This home previously belonged to media mogul David Geffen and It is reported that Amazon’s Bezos spent around $80 million on a few New York apartments earlier this year. An amount like this, therefore, is just a small mark on his overall worth and it is just 2% of his net worth. It is as simple as if you make $60,000 a year, that’s like spending just $165 on a house.

This deal marks a record for the Los Angeles Beverly Hills area. Last week, it is reported that Jeff Bezos and his girlfriend, Lauren Sanchez, were house searching in Los Angeles and touring various mansions throughout the area. Bezos has been searching for a home for the last year, according to the Post by New York. One of the other properties they searched and visited was Chartwell, which is a Bel-Air estate that used as the Clampett residence in the famous television show ‘The Beverly Hillbillies’. Moreover, he finally chanced upon the Warner Estate, which was built by Jack Warner (the owner of Warner Bros) after a year of his second marriage to Ann Page.

This legendary estate is also known as the Jack Warner Estate and it is built by the former head of Warner Bros, Jack Warner on his own. The transaction cost Bezos $165 million and it sets the record for the most expensive sale in California history. A previous record that was set just a few months ago was when Newscorp scion Lachlan Murdoch paid $150 million for the Beverly Hillbillies mansion which is nearby Bel-Air. This transaction of  $165 is the second most expensive home purchase in US history of all time.