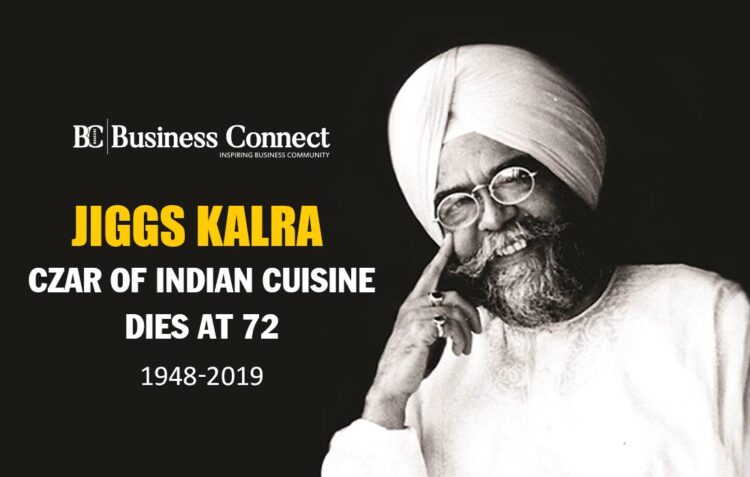 Jiggs Kalra -Czar of Indian cuisine passed away at the age of 72.  Having honoured with the titles like ‘Czar of Indian Cuisine’ and ‘Taste maker to the nation’ Jiggs Kalra was truly an icon, a legend and someone who can be truly regarded as an ambassador.

He was admitted in the hospital for past few weeks. Zolawar Kalra, his son,  had updated through an Instagram post that

“Today is my father Jiggs Kalra’s 72nd birthday. This is the first time unfortunately it has been celebrated in hospital, as he isn’t well. Last year we celebrated it together as a family. Nothing matters more than time spent with your parents as each and every single birthday matters. He is a toughie. Has been battling his stroke for 19 years and will be back soon,”

“Goodbye old friend.The great Jiggs Kalra who did so much to rediscover the lost secrets of Indian food and who gave chefs their rightful place in the sun goes off to that great kitchen in the sky to ensure that the Gods eat his wonderful food.There will never be another Jiggs,”Mr Sanghvi a food critic tweeted.

“My deepest condolences to @ZorawarKalra & Dildeep.They were the best son & daughter-in-law Jiggs Kalra could ever have hoped for. At this sad time I remember how Zorawar kept his father’s legacy alive and turned Jiggs’s name into a global brand.I know how proud Jiggs was,”he wrote in another tweet.

Filmmaker Hansal Mehta, in a condolence message for Jiggs Kalra, wrote on Twitter, “Thank you for introducing me to Indian food and it’s treasure of recipes. All your books adorn my bookshelf and the masala and oil on each page is testimony to how your recipes have shaped my passion for cooking.”

In his illustrious career spanning over four decades, he was responsible for reviving some lost recipes and introducing Indian cuisines in the International market. Jiggs authored 11 books among which his Book ‘Prashad’ is considered as one of the extraordinary books for chefs around of the nation.

Jiggs Kalra introduced the finest delicacies  for the royal kitchens of India. The most remarkable one was Galouti. He has been credited for establishing some of the most highly rated restaurant in India. Besides representing India for multiple food festivals,  he has also served the likes of late princess Diana, former president Bill Clinton and none other than Prince Charles himself.

In India Trade Promotion Organisation (ITO) he was appointed as an advisor by Government of India. Over his notable sparkling career he went on to be become a food columnist, served as an anchor for many television program aired on Doordarshan, an author, a restaurateur, a food consultant and a Mentor & Culinary Director at Massive Restaurants. He later went on to introduce award winning restaurant concepts like Pa Pa Ya, Masala Library by Jiggs Kalra and many more. Though Kalra was never a chef himself, his work played a pivotal role in shaping the life of countless chef. Throughout his journey he aimed at reviving the lost recipes and setting standard for cooking style.

Let us think for a while how he may have developed that exquisite taste and un-matchable flavour which made India proud on International forum. All this is remarkable. Hard work, determination, courage to take risks , not being afraid of failure and ability to bounce back were some of the strong forces which made Jiggs Kalra what he was. And good parenting with lots of trust and support made his son follow the same path of creating flavours in the life of many.