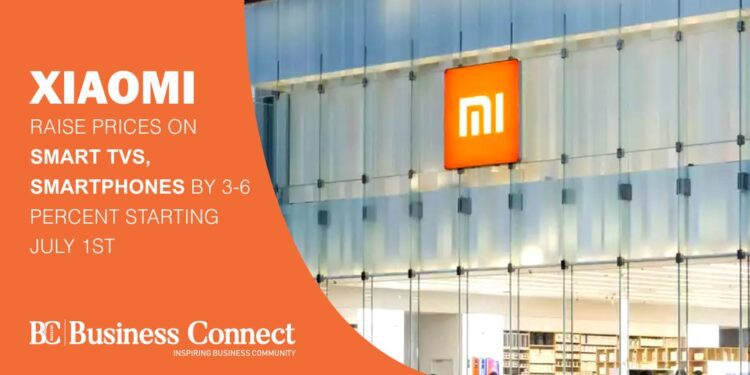 Xiaomi, India’s most popular smartphone and smart TV brand, stated that shortages of electrical components, shipping costs, and other economic constraints prompted the firm to raise the retail pricing of its devices.

Xiaomi said on 30 July that starting July 1, it will raise the pricing of its smartphones and smart TVs in India by around 3-6 percent due to supply shortages and higher shipping costs.

The forthcoming TV price rise by several companies, according to the report, would be the third round in the previous six months. Companies have already increased the cost of televisions by 10% to 12%. The year 2021 will be remembered as the year when television prices increased the most in a single year.

The major cause for the price increase in TVs is due to a global shortage of ‘Open Cell’ (panel) panels. ‘Open Cell’ accounts for about 70% of the price of a television. They are mostly imported in India from China and Vietnam.

Xiaomi just increased the price of the Redmi Note 10 for the third time in the nation. The reason behind this was a rise in the cost of goods. Chipsets, battery packs, and other components (camera modules, sensors), according to industry analysts, have grown by 20%, 10%, and 5%, respectively.

“The majority of components used in smartphones, Smart TVs, and other electronic gadgets (chipsets, display panels, display driver, back panels, battery, and so on) have witnessed continual increasing movement in their pricing due to enormous demand-supply mismatch,” the spokesman noted.

TV is one of the most popular categories in the appliance and consumer electronics industry. It has a volume of over 17 million units and a selling value of nearly INR 25,000 crore. The TV market is anticipated to rise to 284 lakh units in 2024-25, up from 175 lakh units in 2018-19, according to joint research by CEAMA and Frost & Sullivan.

Manu Jain, the Managing Director of Xiaomi India, stated that the firm has sold 3 million ‘Made in India’ TVs and demand for TVs is increasing rapidly. He went on to say that the firm is dedicated to long-term investment in India, where it would produce not only smartphones and televisions but also components.