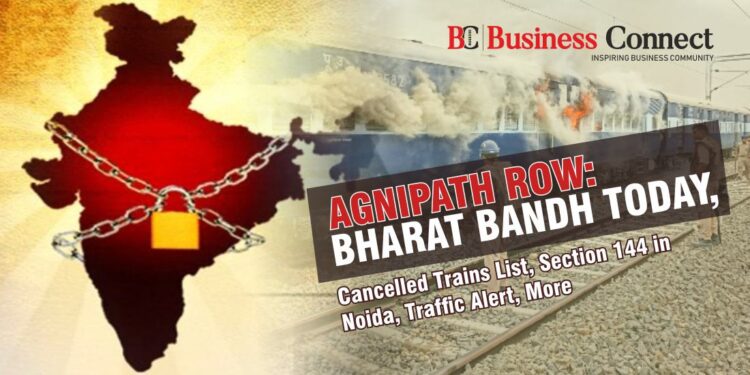 Amid protests across the country, several protesting groups have called for a Bharat Bandh on June 20 against the Centre’s newly introduced Agnipath recruitment scheme. The Centre decided to raise the upper age restriction for recruitment under the “Agnipath” scheme to 23 years from 21 years for the year 2022, citing widespread violence and dissatisfaction amongst the youth against the new model for recruitment of soldiers into three armed services.

In Delhi’s neighbouring areas of Faridabad and Noida, Section 144 of the Code of Criminal Procedure (CrPC), which prohibits the assembly of four or more persons, has been invoked. Rajasthan has joined a host of states that have imposed section 144 of the CrPC in some areas in response to the call for a Bharat bandh. Apart from Rajasthan, Punjab, Uttar Pradesh, and Haryana have placed restrictions in some areas of their respective states. The Bihar government has increased security at party offices considered vulnerable. As of now, internet services remain shut in 20 districts.

All you need to know

#WATCH | Massive traffic snarl on the Sarhaul border at Delhi-Gurugram expressway as Delhi Police begins checking of vehicles in wake of #BharatBandh against #AgnipathScheme, called by some organisations. pic.twitter.com/QPYtguMKV1

10 Best Active Dog Breeds That Will Help You Stay Fit