These 5 lessons every entrepreneur should learn from Ramayana 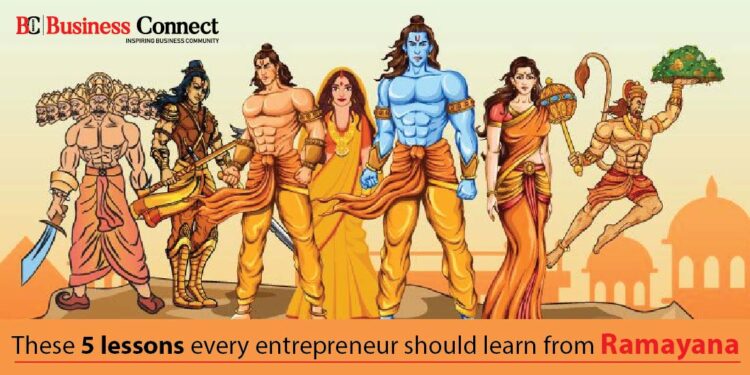 These 5 lessons every entrepreneur should learn from Ramayana

“There are three powerful evils: anger, lust, and greed”

Ramayana is a Hindu mythology epic. Dashrath, the ruler, had four sons: Ram, Lakshman, Bharat, and Shatrughan. Although they were half-brothers, they adored each other. They were married to King Janak’s daughters. Ram married Sita, Bharat married Mandavi, Lakshman married Urmila, and Shatrughan married Shrutakirti. Shanta, their eldest sister, was their only sibling. When Ram had to depart the kingdom, things took an intriguing turn. The Ramayana, authored by Saint Valmiki, was a story full of twists and turns. It teaches us a great deal. The following are the five entrepreneurship lessons from the Ramayana.

A true leader is someone who develops the next generation of leaders. This is critical to move the company ahead. A leader can bring out the best in others by providing consistent support and mentoring. Lord Ram had faith in Hanuman’s and Sugriva’s army generals’ abilities. As a result, every one of them may be able to help in some way to Ravana’s downfall. Within organizations, leaders must identify potential leaders and provide them with the opportunity to act, much like Ram gave Hanuman complete freedom to command specific fronts of the epic fight.

Enthusiasm has great strength. There is no greater strength than enthusiasm. There is nothing that is not attainable in this world for the enthusiastic – Lakshmana to Rama

Queen Kaikayi, Bharata’s real mother, asked that Ram be sent to the forest for 14 years and that Bharat be crowned king. King Dashrath was devastated, but when Ram learned of the situation, he honored his father’s commitments. It teaches us to keep our commitments regardless of the circumstances. Ram kept his promise to his father. All managers, executives, and employees in a company should be aware of it. Everyone in a corporation must attempt to meet the commitment made by the manager or representative to other entities or individuals.

There is no deity powerful than time – Ramayana

It was a difficult effort to construct the Ram Setu bridge connecting India and Sri Lanka. All of the monkey warriors and their leaders, including Sugriv, Jamvant, Hanuman, Nal, and Neel, supplied manpower and teamwork. It is regarded as the world’s first constructed bridge.

No life is expunged before the appointed hour – Ramayana

The fight in the Ramayana was waged to set an example for society to follow the value system that society had established. Under the guise of self-interest, the perpetrators must face a zero-tolerance approach. Ravan was the villain who kidnapped Sita and forced her to marry him. As a result, Ram killed Ravan. Every business has a set of values. To avoid disciplinary and criminal action, all employees must understand its value and learn to obey it.

There is no looking back – Rama to Kaikeyi

Kaushalaya, Sumitra, and Kaikeyi were King Dashratha’s three wives. As a result, controlling your firm gets tough when there are too many stakeholders involved in decision-making. Rama was born to Kaushalya, Bharat was born to Kaikeyi, and Laxmana and Shatrughana were born to Sumitra. When there are too many stakeholders in a business, power is divided.

Covid-19 vaccination for children: Here’s how to register, documents required, and more details

Covid-19 vaccination for children: Here’s how to register, documents required, and more details