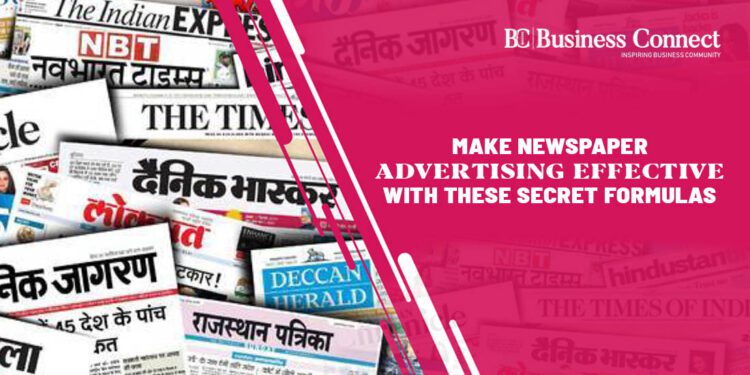 Hello everybody,  It’s no secret that newspaper readership has been steadily declining for the last decade, but even so, IRS (Indian Readership Survey) shows that 425 million Indians still read the newspaper, whether in print or digital format. According to journal.sagpub.com, a decent population would love to read the local news to stay up to date. This begs the question; how can you effectively reach this highly engaged audience?

About newspaper advertising in India:

Advantages of advertising in Newspapers: –

It shouldn’t come as a surprise, and it is worth mentioning that not every newspaper is the same. Any business can run ads on social media platforms, but not every business should place an ad in the local newspaper. Advertising in a regional and national newspaper can be more expensive than local news. It is going to be a more targeted approach. Another good thing about working with a local news media is that they have several other media components to help you supercharge your message, including a print ad in the newspaper, digital newspapers display advertising, a targeted email blast, etc.

If you are trying to reach specific types of audiences, then think about the type of customers you want to get in front of and get in touch with your regional newsgroup to determine a great plan of action.

Researching newspaper options and negotiating Newspaper advertising rates are really important, but it is also necessary to know about your competitors. Though, it might seem strategic to mirror your competitor’s growth tactics. But it becomes counterintuitive when you and your competitor are trying to get the attention of a similar audience. In this case, it will reduce the effectiveness of your newspaper advertisement camping. As per our advice, approach those newspapers where you have no competitors.

So, take note, where are they advertising? What does their newspaper advertising design look like? What messages they are delivering, and devise your strategy while taking that information into account?

SECRET#3: – Invest in Good Design and show it more than once.

Even though your consumers are engaged with your content, still, you need to get their attention. To convey messages, put your creativity on it and focus on attractive headlines, beautiful imagery, and catchy slogans – that can stay in customers’ minds.

Keep your message short and simple but still filled with enough information to empower the audience to take your desired action. If you want an awesome result and get the most bang for your buck, place the ad more than once and in more than one place. Studies have found that repetition is beneficial for memory. If you are going to invest in creating an ad, you want to ensure the greatest chance for success.

What are the disadvantages of newspaper advertising?

As We have mentioned before, newspaper readership has been declining for the last decade, especially since internet data became cheaper. It is one of the most often-cited disadvantages of newspaper advertising. Some people don’t want to wait longer for a newspaper to be supplied at the doorstep. Instead, they like to read online publications and magazines for free or at the same price, which gives them instant access and sometimes a constantly updated source of news.

Which advertisement medium should we choose?

In the Digital world, online advertising media is more popular than newspaper advertisement. Small business can easily promote their products to a specific type of audience for free or paid both ways, according to their budget. Companies like Google, LinkedIn, Instagram, Pinterest provide paid advertising services.