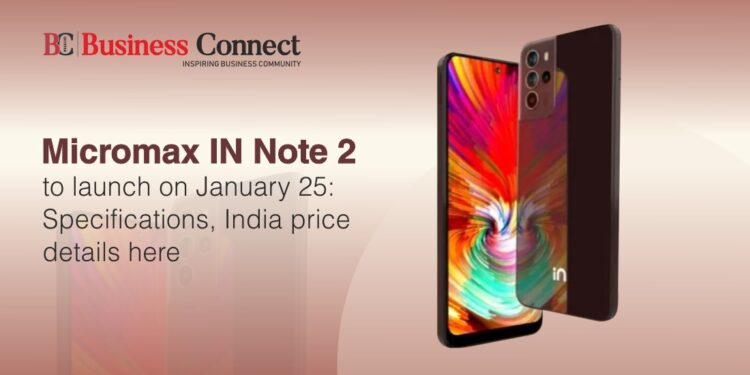 Micromax, an Indian smartphone manufacturer, has announced that the IN Note 2 will be released on January 25. On Twitter, the company posted a brief teaser video displaying the smartphone’s design. The smartphone will be offered in two colour options: a new brown colour and a glossy colour. Micromax had previously announced the IN Note 1 and IN 1b in 2021, with the IN Note 1 featuring a 48MP AI Quad camera, MediaTek Helio G85 Gaming processor, and a 6.67-inch display for INR 10,999. The IN Note 1B, which features a MediaTek Helio G35 chipset, was released at INR 6,999. The IN Note 2 smartphone will be a successor to IN Note 1.

The smartphone will most likely be sold only through Flipkart and a few offline retailers. The Micromax IN Note 2 will include a 5000 mAh battery and support for 30W fast charging. A 3.5mm headphone jack will be included, as well as a Type-C connector and speaker grille on the rear.

An octa-core MediaTek Helio G95 processor will power the device. It will be available in RAM variants of 6GB and 8GB. There will be two storage options for the phone: 64GB and 128GB. Android 11 will be installed on the upcoming IN Note 2.

Which Cancer Insurance Plan is best in India for a 26 year old?